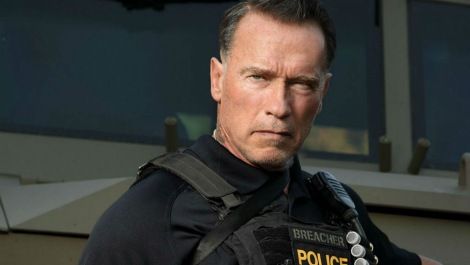 Not since 1987’s Predator has Arnold Schwarzenegger been surrounded by so many bulging alpha males, none of whom would look out of place in the Austrian Oak’s Mr. Universe doc, Pumping Iron . But while the guns – of bicep and M4 variety – are one of the main reasons to indulge in Sabotage , it has more in its locker.

For as much as it’s a new Arnie movie (the best of the post-Governator comeback era), it’s also the latest foray onto America’s mean streets by David Ayer ( Training Day , End Of Watch ), and as such it explodes with colourful lingo, immersive camerawork and sudden, brutal violence.

Approaching his end of days in law enforcement, John ‘Breacher’ Wharton (Schwarzenegger) is a living legend, his body covered in Vietnam-era tattoos and his record in the DEA unimpeachable. Or so he thinks.

But IA is the least of Breacher’s worries. A more pressing concern is that someone’s nicked the $10m that he just nicked, and his team is now being killed off one by one. Breacher is in over his buzz-cut head, his only option to trust a workaholic cop (Olivia Williams) who’s not about to take any macho shit.

Clearly of the school of thought that a good screenplay should start with a bang, Skip Woods, whose script was polished (or roughed up?) by Ayer, tosses us straight into the action. Ten minutes in and Breacher’s task force has stormed a mansion, blown shit up, eviscerated a bunch of goons, set fire to hundreds of millions of dollars, escaped through a sewer and lit their cigars.

Then things get really gnarly, with the ritualistic killing of Breacher’s men proving as imaginatively nasty as anything in the debut season of Hannibal , and suggesting that Woods’ pitch might just have been ‘ Commando -meets- Saw ’.

Of the swinging dicks on show, Worthington, Holloway and Manganiello duke it out for the title of alpha-male, the former almost unrecognisable with his bald head and death-metal goatee, and all three proving so physically imposing you can almost see Arnie standing on tiptoe.

But it’s the ladies who steal the show, with The Killing ’s Enos – a real-life black belt – giving better than she gets and the Cambridge-educated Williams undergoing a startling makeover to convince as a haggard, hard-ass Atlanta detective. It is, however, Schwarzenegger’s refashioning that will invite the most scrutiny. The tats, the haircut, the grizzled appearance as the muscles shrink and the jowls fatten…

Ayer, obsessed with authenticity, here attempts to give us the man behind the icon, even demanding his star exhibit genuine pain and regret in an effort to legitimise Breacher’s sorrowful backstory. Arnie is, in short, required to act, and he damn well almost does it, at times displaying sides we’ve not seen in a career spanning five decades.

But let’s not get carried away: Breacher, while presenting a minor stretch, is hardly the kind of transformative turn that wins over the Academy – and there’s no getting around the fact that Arnie’s bombastic, heavily-accented delivery is just too familiar to allow the superstar persona to completely disappear.

(A line that apparently got cut was Breacher spitting, “Who stole my fucking stapler?” Just reading it in his voice shows how any dialogue, no matter how mundane, becomes an Arnie one-liner.)

Sabotage is not for everyone. Some will see it as a laudable mix of ’80s action staples and fast, modern, experiential filmmaking, while others will feel it falls flatly between the two stools. The brass-balls banter will no doubt be accused of misogyny and the bloodletting (this is the messiest 15-cert since Saving Private Ryan ) will appal the faint-hearted, though it should be remembered that Ayer, who grew up in South Central LA and spent time in the armed forces, has seen violence first hand.

But go with Sabotage and it’s a crashing good thrill ride – indisputably so in the case of an epic street chase that sees Arnie, no longer indestructible, spraying bullets at drug lords from the back of a tilting truck with Ayer favouring Class-A stunt work over CGI. This scene, like the entire movie, was shot on the real streets of Atlanta, and crystallises Sabotage ’s ethos: old-school Arnie action performed by a new(ish) Arnie in a real world.

Verdict: An ageing Arnold Schwarzenegger ‘does a Clint’ and allows mortality to creep up… while still kicking inordinate amounts of ass. Get to the chopper and instruct the pilot to head for the nearest cinema for a bruising, blistering ride.