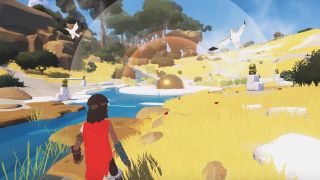 You’ve seen very little of this game so far, but that doesn’t mean there’s nothing to see. This, after all, is a title highly unsuitable for the traditional videogame PR blitz. You’ve not seen a combat trailer, because it has no combat. You’ve not been introduced to its cast of characters, because it only has the one. While the big publishers’ blockbusters often seem designed to meet the needs of the hype train as much as those of the player, the team at Tequila Works wants you to go in knowing as little as possible about its game. To know too much would be to spoil it.

It’s in keeping with the spirit of the game, too. Rime is about a boy (or indeed a girl, if you prefer; the team has aimed for a gender-neutral character design) coming to on a strange island in a world that, while familiar, doesn’t quite make sense. It is a game about the simple thrill of childlike discovery; of experimenting with the world and the limited tools at your disposal.

And limited they surely are. q makes the boy jump; press w and he shouts. That’s it, but it’s all that’s needed to pass every puzzle in the first island. After that Rime takes everything you know about the real world and then tips it upside down.

Take, for example, the passage of night into day. Rime’s world has a day/night cycle, but light is a vital tool here. Certain events off the beaten track will only happen at a certain time, and it’s a puzzle-solving tool, too. It’s why the trickiest puzzle of Rime’s first playable demo has you running along a circular track, the sun setting, the sky turning orange, then purple, and finally to the blackness of night as a doorway appears on a bridge above you. Turn around and run the other way and it disappears again, the midday sun soon looming high in the sky again.

Perspective is also vital. There’s a nod to games such as PSP puzzler Echochrome and mobile maze sim Monument Valley in the way Rime makes use of the camera control on the DualShock 4’s right stick; a gap in a broken bridge may look impassable at first, but if you make it look smaller with some judicious camera adjustment, then it will be. Line up three hunks of gold dotted around the scenery and together they form a small sphere. Is it a small sphere nearby, or a large one farther away? As it turns out, it’s both, and the larger one is a bell of sorts, reflecting the boy’s shout out over a wide area, something used to solve a couple of puzzles early on.

It’s simple stuff, really, but it rarely feels like it, because you’re given so little help. This isn’t just a game with no combat or dialogue; there’s no tutorial or overt signposting, either. All you can do is explore, just like a child would. There are subtle guiding hands – a dynamic musical score builds when you’re approaching something important, and every so often the camera angle will shift to highlight an object of interest – but for the most part you, like the lead character, are entirely alone. The thrills here come not from big set-pieces or explosions, but the simple joy of finding what lies around the next corner.

All of which goes some way to explain why Tequila Works is being so secretive about Rime. Details are slowly spilling out – there are multiple islands, spread across five sections, one each for the five stages of grief. The boy will change as the adventure progresses, growing not in power but confidence, his animations changing accordingly. He will discover an ancient civilisation; the large walking globes shown in the game’s second trailer, which the team is calling Sentinels. But until more is known it’s understandable that Rime is being compared to games such as Ico and Journey. Understandable, but wrong: Rime is a game all its own, and the most intriguing one in development for PS4.