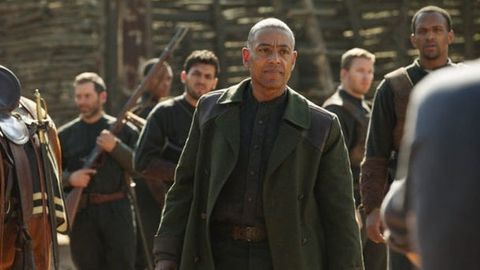 THE ONE WHERE The lights go out. Fast forward 15 years to a world of manual labour, Miles Matheson, Monroe militias and a quest for, quite literally, power.

VERDICT Revolution , the latest show from exec producer JJ Abrams ( Lost , Fringe ) and Eric Kripke ( Supernatural ) packs a lot into its opening episode. Setting up a world without electricity almost as quickly as it kills off seemingly principal characters, then jumping ahead 15 years to lay out plot threads of why the mysterious global blackout occured, then a bit of swashbuckling swordplay, kidnapping, family responsibility and a story arc quest.

On the surface the pilot is a post-apocalyptic drama, but in the loosest sense. There are no zombies, no nuclear bombs, and from the small farms and communities we see, the show bears more comparison with the wild west with its horses, bows, muskets and swords. The battle for very basic human survival – usually the basis of any post-apocalyptic story – is seemingly done, dusted and in the past. Life is tough but folk are clean of face. Basic hygiene is still in fashion, thankfully.

By playing out the global disaster early on the most visually impressive scenes are over in the first 15 minutes; there one or two flashbacks and I suspect plenty of room for more as we meet the characters and jump back to watch their world go dark and how their current situation occurred.

The 15 year gap serves to highlight some differences between the older and younger generations: those who remember the world “before” and the new generation who have never used a computer or watched television. Also by jumping ahead 15 years the bleak desperation of the immediate aftermath of a world plunged into darkness is avoided, in favour a of discovering the new social and political landscape the show has created for its characters.

It's hard to get a grip on a new show from the pilot, and unfair to judge to harshly this early. There’s plenty to like, including the cool ruthless militia man Tom Neville, played wonderfully by Giancarlo Esposito, and Doctor Maggie with her deliciously crisp accent and deliciously dark methods of dispatching any bad men who mess with her on a plane.

The action is handled well by director John Faverou ( Iron Man ) though it's mainly all plot and set-up as we meet the characters. Headstrong Charlie Matheson and her brother Danny, beardy ex-Google exec Aaron, the Monroe militia and the ass-kicking Uncle Miles who's just trying to keep a low profile away from his military past.

The tone and vibe is a little bit “ Twilight meets The Hungers Games ” but I'm sure it'll embrace what works as it hits its stride. At this stage, I could start guessing stuff – like is archer Nate going to fall in love with Charlie and betray the militia? – but it's too early to second guess. It'll be interesting at the very least to see what kind of world these guys now live in.

UNFORTUNATE VICTIM OF THE WEEK The guy shot by the mini crossbow that was hidden behind the sofa.

ELECTRIVIA The last television show I can recall where the electricity went off was the cartoon Visionaries: Knights Of The Magical Light . On that occasion it was the alignment of three moons that caused the collapse of technological society. Instead folk turned to these blokes dressed as colourful knights who convinced them to return to a feudal society governed by magic as that was obviously a better alternative. Anyone who disagreed was attacked by giant holographic animals. As you would. ( Don’t forget ’70s BBC children’s show The Changes – way too old ed. )

Some of earliest recognised uses of electricity came from the physicians in the court of Roman emperor Claudius, who would numb patients using catfish.

IT’S WOSSERNAME Anna Lise Phillips who plays Maggie, was also in Terra Nova and before that, Home and Away.

BEST LINE:
Aaron: “80 million dollars in the banks and I’d trade it all right now for a roll of Charmin."