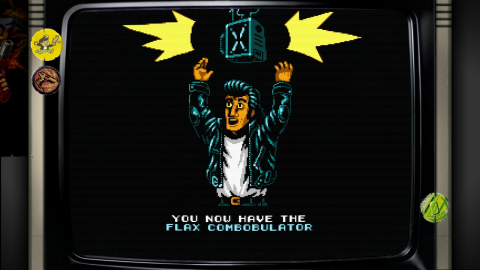 It’s fun to revisit the past, whether it’s by watching an old film or replaying a game from your childhood. There have been many recent indie games that indulge in deep tributes to the past, but developer VBlank has broken the mold when it comes to retro love in its newest game. Retro City Rampage effectively wraps aging gamers in the warm embrace of the familiar, but those old school mechanics come packaged with painfully retro design as well.

The lighthearted concept of RCR’s story fits for the anything-goes nature of where it draws inspiration. You take on the role of Player, a comically violent career criminal that accidentally gets pulled into the vague future. He needs to help a friendly, oblivious scientist rebuild the time machine, but also take down an evil, world-destroying game publisher.

This is all communicated inside some of the deepest collections of references to the 1980s and ‘90s likely seen in gaming to date. The intro alone is rich with Mario, Mega Man, Metal Gear Solid, Castlevania, and other allusions, and that level of old-school love is consistent throughout. Retro City Rampage doesn’t limit the references to games, either. People in their mid-to-late 20s will at the very least have a good chuckle at the references to Saved by the Bell, Robocop, and Back to the Future. And RCR keeps all this from getting too sentimental thanks to its cheeky sense of humor.

The gameplay and graphics do their best to match the references in their nostalgia quotient. The lack of detail on the sprites and the limited color palette make the game look like it was ripped straight out of a Nintendo Entertainment System, further supported by the glorious chiptune soundtrack. The top-down, open-world gameplay not only works as a Grand Theft Auto homage--RCR got its start as an indie, 8-bit recreation of GTA--but it still plays like games of the past, thanks to many of the missions embracing the design of older titles.

Sadly, that retro gameplay stays far too true to its past. Excitement was high at the start of a mission in tribute not only to Paper Boy, but also the humorously terrible Back to the Future game. But once the appreciation was complete, the accurately bad gameplay was increasingly exasperating thanks to the unfair enemy placement, frustrating controls, and brief time limit of the mission. Once the objectives were finally completed, seething rage had replaced the happy memories.

This pattern repeated in many of the campaign’s missions. Another clever reference to a classic game would be introduced, then it would be thrown off by grossly unfair circumstances that were more annoying than anything else. Not every mission is an unfair mess, and the twin stick shooting could be particularly fun in some stages. Then again, other mission objectives annoyingly demanded more precise controls than RCR had on hand.

The game also engages in a major pet peeve multiple times. Before an escort mission, RCR remarks about how boring escort missions can be. And to prove this point you are thrown into a really boring escort mission. Joking about an obvious flaw is not the same as fixing it or not including it all together. RCR doesn’t need to force players into a tedious escort mission to inform people of their poor quality.

The flashes of good gameplay kept Retro City a fun destination despite the frustrations, and it was especially engrossing thanks to the search for secrets and minigames, including arcade titles based on similar indie hits Bit.Trip Runner and Super Meat Boy. The rampant nostalgia is incredibly endearing, and it’ll be very appreciated by lovers of that period in American pop culture. But games like Bit.Trip and Meat Boy are better than Retro City Rampage, and it's because they don’t just emulate classic games, they move past them. RCR instead submerges itself in an ocean of retro references, but forgets to come up for air often enough to make the game all that fun to play.

This game was reviewed on the PlayStation 3.