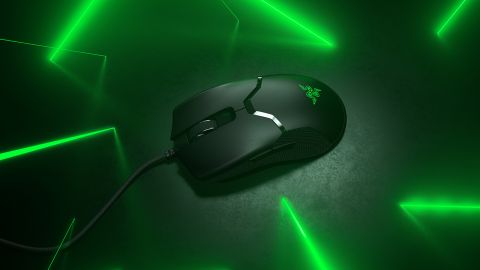 Lightweight, responsive, and blisteringly fast - the Viper might be one of Razer's best gaming mice in years.

Sometimes it’s only clear how far we’ve come when you spend a moment looking back. Take the best gaming mouse, for instance. A decade ago, getting anything beyond 3,200 DPI (‘dots per inch’, or how fast your cursor can move) was good going. Now we’re averaging ten times that kind of speed. Until Razer upped the ante, anyway.

Their new ambidextrous mouse, the Viper, aims to give us both the most accurate sensor and quickest click possible. And you know what? They manage it - mostly. Designed with esports in mind and tested extensively by competitors, this is a mouse built to perform.

The Viper’s something of a departure for Razer: rather than the smooth, continuous shell you’ll be used to seeing on their pointers, from the DeathAdder to the Mamba, this has a more modular look. Split into sections and divided by a sizeable groove in the plastic, it gives the impression of a kit-bash. That won’t be to everyone’s tastes, and neither will the RGB branding. The iconic Razer logo is hidden beneath a layer of plastic this time around, and it’s only visible when connected to your PC or laptop. Although that provides a focused air because all distractions have been stripped away (there’s a surprising lack of RGB tomfoolery here in general), it has the downside of making the Viper seem a bit… well, unfinished.

Still, I can’t criticise anything else about its design. The Viper’s sides are made up of tiny rubber hexagons that provide a lot of grip, while the matte buttons are pleasant underhand. Equally, the braided Speedflex Cable offers a smooth glide with less drag than usual.

The Viper's headlining feature would have to be its speed. To begin with, it sits at a dainty 69g. That’s a good 10-20g less than the competition, allowing it to glide effortlessly across your mouse pad with the minimal amount of force. Secondly, it packs a 5G optical sensor and up to 16,000 DPI. However, these aren't the real stars. Instead, the apple of Razer’s eye would have to be their brand-new Optical Switches. This is the first Razer pointer to feature them, and they allow for a damn-near instantaneous response upon clicking. Most mice use internal metal contacts to register your clicks, and that slows things down due to the technological jiggery pokery required to clean up the resulting signals. Meanwhile, the Viper's Optical Switches don’t need physical contact at all. They utilise an infrared light beam instead that shoots an electrical signal straight to your computer. Basically, this means the Viper reacts fast. Very fast. When combined with 8 programmable buttons and that ambidextrous design, you have a formidable gaming mouse on your hands.

The result of these bells and whistles is impressive. In short, the Razer Viper handles exceptionally well. Its feather-light weight and 5G sensor mean that your cursor flies across the screen at the slightest push, allowing you to have exceptional control in-game. Meanwhile, those Optical Switches result in lightning-fast clicks that are more than handy during a multiplayer firefight. They require very little force to actuate, too.

It’s plain satisfying to use, too. Even though the Viper isn’t as comfortable as a dedicated left or right-handed mouse, it’s not far off. Equally, the side buttons are cleverly positioned to ensure you won’t accidentally hit them during play. It’s a shame that the unused side buttons aren’t disabled as per the Corsair M55 RGB Pro, but that’s a small niggle in the grand scheme of things (and I guess it also means you could switch from a left to right grip at the drop of a hat).

In fact, the only real issue I had with the Viper was its method of changing DPI mode. The button for doing so is located on the underside of the mouse without any clear labelling, and while that keeps it away from the specter of an accidental press, it's a nuisance to change on the fly. Considering the fact that there's a handy little cutout below the scroll-wheel where it could have gone (and wouldn't have been in the way), that seems like an odd oversight - particularly because swapping DPI up or down to suit your weapon seems perfect for an esports-focussed mouse. Still, that's not exactly a glaring problem.

The Razer Viper makes a lot of promises, but it manages to keep them all. This is a fast, responsive, comfortable, and exceedingly lightweight pointer that'll serve you well. A few quirks stop it from being a homerun, but otherwise? It's pretty fantastic.

Lightweight, responsive, and blisteringly fast - the Viper might be one of Razer's best gaming mice in years.