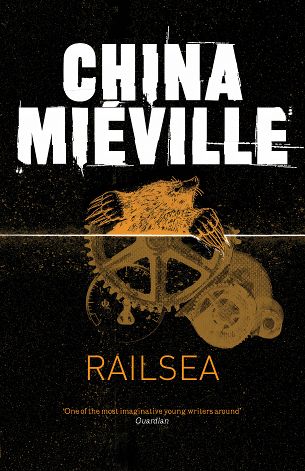 As China Miéville himself discussed when SFX interviewed him recently, there’s a rhythm to his ouevre. Whenever he’s written a novel that’s been “hard won”, he’s followed it up with a book that’s less obviously demanding. So it was that Kraken , a romp of an urban fantasy in so many respects, followed the existential crime novel City & The City .

It’s hardly a surprise, then, to find Miéville’s second Young Adult title pulling into the station after the ambitious and complex Embassytown , a novel that was actually written quite a while before it was published, but extensively revised prior to getting into print. So Railsea is a palate cleanser before Miéville gets serious again, yes?

Yes and no. This, remember, is China Miéville we’re dealing with, a man who has to shave his head to prevent a dangerous build-up of curious notions. Yes, it’s a YA title, but from the first page, when we’re introduced to “a bloodstained boy” by the name of Shamus Yes ap Soorap (Sham for short) then immediately told why we needn’t worry overmuch about his gore-splattered state, this is YA fiction that delights in undercutting what you think might be about to happen.

That said, Miéville doesn’t make things too difficult (a word he hates when applied to his novels…) here, even if using the ampersand throughout rather than plain “and” smacks rather of inappropriate tricksiness. For a start, Railsea is a book built on a simple premise pushed as far as it will go: the idea of trains being akin to ships and sailing a sea of rails. While islands provide refuge, the ground beneath the tracks is home to monsters of all kinds.

Scary. But also exciting, because it’s out on the Railsea ’s “long straights and tight curves” that Sham comes of age as part of the gruff-but-sentimental crew of the Medes, a train that hunts “moldywarpes” (an old word for moles – Archaic Language Ed) and, because this is a book that at times riffs gratuitously off Herman Melville’s Moby-Dick , one giant mole in particular.

You think you know where this is going, right? Again, you’re wrong, because Miéville also adds in pirates, intrepid explorers, switchback conspiracies, a cute pet (if you like bats), Daniel Defoe-inspired moments, a not-so-veiled critique of (venture) capitalism and the nature of debt, the Treasure Island vibe of a lad in danger and salvagepunk weirdness aplenty – and that’s just what jumped out on a first read.

As YA books go, this makes for a rich brew, especially as the first part of the book is a sustained exercise in world-building in which Miéville shows us around the Railsea, its possibilities and pitfalls, its main lines and eerie branch lines. The pay-off, if that’s the right phrase, comes in the second half of the book as different strands come together, and we’re offered Sham in peril and the children’s novel staple of a breakneck chase narrative.

Which is not to say Miéville is being overly didactic, making his young readers tackle some literature in order to earn their exciting finale in some kind of awful Michael Gove, this’ll-be-good-for-them style. Rather, it’s that Miéville never self-consciously front-loads the action and plot as so often happens with YA novels.

But whatever you make of the book’s structure and tone, let’s hope he’s pitched this right because, at least from an adult perspective, Railsea is huge fun, a book that plays intellectual games – the Ahab-like character of Captain Naphi, sustained by her philosophy and “warmed by her crazy” is a particular joy – without ever letting them overpower the sense of a rip-roaring adventure gradually unfolding. Perhaps not a major book by Miéville’s high standards, but certainly one of his most outright enjoyable.

Read our review of Embassytown .
Read more of our book reviews .