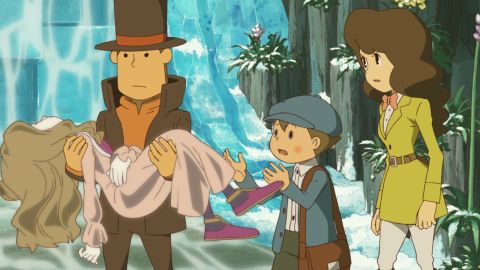 In the world of Professor Layton, every person you meet is obsessed with puzzles. They can’t can’t seem to get enough of them. But after solving hundreds of memorable riddles over the course of six titles in six years, I can't help but think that Professor Layton and the Azran Legacy almost skirts the line of being too much of a good thing. Fortunately for the professor--and players that have grown too accustomed to his gentlemanly ways--Azran Legacy gives Hershel Layton a proper farewell. It ends the series (for now) on a good note, partially thanks to some small gameplay tweaks that go a long way in freshening up the standard puzzle-heavy adventure.

Professor Layton and the Azran Legacy brings to a close the prequel trilogy by connecting the bigger conspiracy alluded to in Last Specter and Miracle Mask. Layton, Luke, and Emmy explore intriguing small towns and assist ridiculous-looking townsfolk in the hopes of unraveling the origins of a an ancient prophecy all while being chased by a gang of criminals. The smart writing, eccentric music, and lived-in world design are as strong as always, playing off relationships between characters that are likable to veterans as well as players fresh to the Layton series. The few telegraphed twists are worth it to see the expansive cast together for one last adventure.

The conversations and lovely animation are friendly and familiar, and the same goes for the core, puzzle-solving gameplay. Azran Legacy has a good mix of enigmas that demand logic and critical thinking of differing degrees, and the Hint Coin system--coins that can purchase puzzle tips--is as helpful as ever when you hit a random puzzle that pushes your intelligence past the breaking point. Developer Level-5 takes great care in balancing the puzzles, and you feel like that “Eureka!” moment is just beyond your grasp almost all the time.

However, for a franchise that asks players to think outside of the box, Azran Legacy has riddles that stick very close to the established formula of the five previous games. At worst, a few of Azran’s puzzles are as fun as homework, including a couple trick questions that border on cheating, while others have solutions you’ll come across more likely by accident than via deduction. With more than 100 puzzles on offer there’s bound to be a some losers, but most are entertaining enough that I found myself searching for bonus puzzles in each new area I entered.

Familiar structure aside, some smaller tweaks do a great job of opening up the game at certain points. Eventually the linear exploration branches out with more open cities and objectives, letting players occasionally plot their own course, something that had been missing in Layton for awhile. The game also takes advantage of the stereoscopic 3D to amp up the excitement for brief action sequences that are fun while they last. These additions prove the franchise still has new places to go, but it also shows that Azran could be better if it truly embraced change.

On the lesser end of new content are handful of minigames and bonus modes that are cute but insubstantial. They all take a ton of explanation (even for a series as instruction-heavy as Layton), and most aren’t worth the effort to learn. The squirrely Nutty Roller is the best of the bunch, while challenges like Dress Up and Bloom Burst have random objectives that don’t seem all that logical, and none will pull in anyone but the most dedicated of completionists. Ultimately, it’s inoffensive extra content, but Azran Legacy is dense enough that it doesn’t need shallow minigames to pad the proceedings.

Professor Layton and the Azran Legacy is more invested in closing the series appropriately than making any major changes, but the formula it adheres to still works. The game stands on its own with an intriguing plot, fun puzzles, and now’s the right time to say goodbye before it turns sour with repetition. Should Layton ever return, he’d need a major overhaul, but at the moment, a victory lap is certainly well deserved for a series as consistently good as this one.