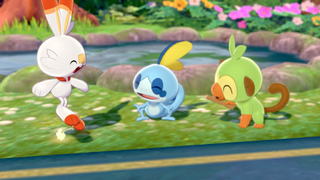 Pokemon Sword and Shield is the fastest selling Switch game to date and has already sold over six million copies worldwide since the games launched last week. The Official Pokemon Company posted the figure on Twitter, and pointed out that this makes it the fastest selling title on Nintendo's console so far.

While it's important to note that this accounts for both versions of the game, Sword and Shield have been a runaway success in sales. Historically, the mainline Pokemon series has always sold to impressive figures, with the previous Pokemon games, Pokemon Sun and Moon, being one of the most successful sellers for the 3DS. Just 3 months after the release of Sun and Moon, Nintendo revealed that it had sold 14.9 million copies globally, making it yet another success story for the franchise.

The impressive sales figures come in spite of a lot of noise expressed online in the lead up to release surrounding Sword and Shield's Pokedex, since it doesn't include every Pokemon from all generations. This has even led to a modder using code to try and reintroduce omitted Pokemon.

Sword and Shield's staggering number of sales continues to demonstrate just how much love and passion there is for the series. In the lead up to the release of the latest adventure to be the very best, like no one ever was, we saw a wealth of interesting new Gen 8 Pokemon coming to the Galar region, and the new world we get to explore has already succeeded at charming many Pokemon fans already.

After some Pokemon goodies? Stay in the know with our round of the best Black Friday Pokemon deals.