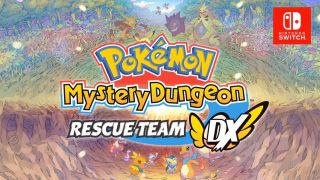 Pokemon Mystery Dungeon: Rescue Team DX is coming to Switch in just a couple of months, which is great news considering we weren't expecting a new Pokemon game quite so soon.

But, just in case you didn't experience the originals back on the Nintendo DS and Game Boy Advance, they are a bit of a different take on the traditional Pokemon experience. Instead of training Pokemon and trying to be the very best, you wake up one morning to discover that you've actually become a Pokemon. According to the fellow 'mon you meet, natural disasters have started happening all over the world, so you'll need to partner up and head out to rescue the Pokemon in trouble.

You can choose your character and your partner from 16 different Pokemon, and then take jobs from various different places to earn rescue points, which in turn raise your rank. These will send you to Mystery Dungeons, which are inhabited by enemy Pokemon that you'll fight in turn-based battles.

The games also come with a number of new features for new players to the Mystery Dungeon series, including an auto-mode feature that lets players progress through adventures more easily, the ability to let up to eight Pokemon travel with you, and the option to ask another player to rescue them if they're defeated in a dungeon.

If you want to see what makes these games so exciting, why not check out the free demo version of Pokemon Mystery Dungeon: Rescue Team DX that launches on the Nintendo eShop today.

Psst, in case you missed it, the Pokemon Sword and Shield Expansion Pass also got announced today, and we've got all the details.