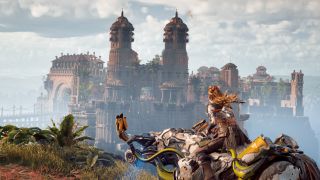 Whether it's simulating lines of faux code or completing tenuously linked skill-based minigames, hacking has formed part of many a PlayStation game over the years. We've selected our stand out system infiltrating moments, so seize control of your operating system and read on.

Can’t afford the lofty prices over at Rapture’s Circus Of Values vendors? Then get your hack on, friend. Hacking objects challenges you with stopping a pendulum in small green zones, while certain puzzles make you arrange rows of pipes. Of course, if you’re lazy, just use a handy Automatic Hack Tool.

When you’re plunged into a futuristic battlefield filled with outrageously athletic warriors who can all wield a bow with the precision of a Terminator version of Robin Hood, hacking tiny security terminals likely isn’t your top priority. Still, certain missions make you fiddle with tiles to progress, so try not to get hacked off.

The remains of humanity may have regressed to the Stone Age, but there’s no reason for Aloy to be glum when she can hack kickass robots then ride them like murderous metallic ponies. Thanks to Aloy’s Focus (a fancy face gizmo), our fave Nora warrior can override Horizon’s machines, using Striders and Broadheads as handy mounts.

Chips are swell. They taste amazing slathered with melted cheese, and can help a futuristic agent hack his enemies’ every move. Okay, granted, one of those isn’t the potato-based kind. Miles Kilo’s DART-6 chip allows its owner to breach his foes’ minds, letting him briefly control their actions. We’d still prefer cheesy chips.

Andromeda’s space sudoku is more irritating than being serenaded by Joe Pasquale while someone slaps your face with a soggy kipper. During your quest Ryder encounters Remnant Vaults, and to break into these hidden structures, you must hack decryption puzzles by arranging quadrants of alien symbols. Woo!

Now this is how you bring sexy hack. Ubisoft’s original vigilant pooch was a rather miserable mutt, but the breezy San Francisco-set sequel is a rollicking cyber thrill-ride. As newbie Marcus Holloway you can deploy RC racers to hack high-tech security networks, mess with traffic lights, or fiddle with ATMs to make a stingy Baysider pay his alimony.

Being a cool augmented asskicker isn’t all ‘using your robo legs to jump 15 feet into the air’, y’know. On occasion, Adam Jensen has to embrace his grey matter and harness into his inner tech guru, hacking into directories to unlock doors. Upgrade the right abilities, and the bionic brute can hack remote turrets and CCTV systems.

The Creative Assembly’s sci-fi survival horror is gloriously lo-fi, mimicking the aesthetic of Ridley Scott’s Alien. Take the cheap-looking Access Tuner mini-games. By matching crude symbols on the device’s screen, you can hack the Sevastopol’s cameras and doors.