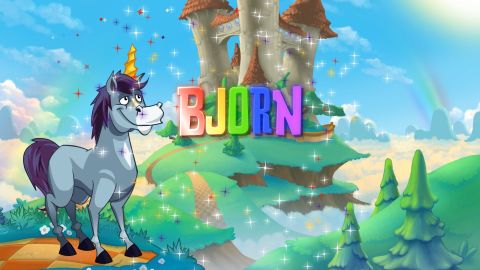 I only jotted two things down while I played through Peggle 2 on Xbox One. The first was: "joy-puke rainbows :)!!!!!!!!!!" Anyone who played the original likely knows why. Peggle, at its most basic, is a beautifully crafted symphony of simplicity. All you do is shoot balls at pegs, and yet it's mesmerizing and magical, whimsical and absurd. Fireworks explode, unicorns fart rainbows, and when you smash the last peg on the screen and "Ode to Joy" swells up, it's impossible not to smile. Well, smile or "joy-puke rainbows." It's crafted in such a way that every action feels rewarding; that's just Peggle. That's the Peggle you can get on Xbox 360 or PlayStation 3 or Steam or DS or your iPhone. That's the Peggle you played in 2007, and Peggle 2 is… basically the same thing, except there's less to do.

Right under the thing about vomiting, I wrote: "more of a remake than an actual sequel" followed by a frown. It took a lot to turn those smiles upside down, too. Peggle's gameplay isn't just "fun," it's scientifically enjoyable (seriously, East Carolina University did a study that showed 45% reduction of depression and a 63% reduction in anger when people played Peggle). It's downright medicinal, and Peggle 2--rightfully--doesn't change much on that front.

You fire silver balls at multi-colored pegs and watch with glee and jubilation as the ball bounces around the stage. It's basically pachinko, but amplified with power-ups and points to make every action feel immensely rewarding. It doesn't matter if you pull off a perfectly aimed shot or if the game's physics luck you into success--Peggle just makes you feel good for the few hours of content it contains.

The original Peggle had color blind mode, and for good reason: knowing the difference between an orange and a blue peg is key to being able to play. Peggle 2, for some reason, is totally lacking in this department, meaning that anyone with color blindness is going to have an extremely hard time playing the game. It's something that can easily be added via patch, but it's a curious omission.

Thing is, there's just not much to it. The original Peggle was endlessly replayable for a slew of reasons, not the least of which was the fun of replaying boards with different Peggle Masters. There were ten different colorful characters (and more added with expansions), all of which included their own special powers. Peggle 2 Masters' powers are much more complex and interesting than they were in the original, and each has its own suite of levels to play through, but there are only five characters. This means five less ways to play, and five less Masters worth of levels to go through--and less variety, since the levels were built around the Masters' power. Less Masters is bad, even if the new ones are more clever and have been given more of a spotlight.

At least the Masters' presentation has been cleaned up and improved, as they've been moved to the side of the screen where they dance and cheer for you. It's adorable, and transforms them from small icons to fully fleshed-out personalities. Bjorn the Unicorn poops rainbows, Berg the yeti adorably flashes his butt when you win, and Jeffrey (a giant with a penchant for bowling and Big Lebowski jokes) has two screaming mountain goats on his back. When you complete a stage the goats freak out so much that one's head explodes. The added visual flare is adorable, and makes the already fantastic presentation all the more hilarious.

After you complete the initial batch of stages (which shouldn't take more than two hours) you're left with a few options. You can start grinding through Trials, which task you with altering your playstyle to complete a level under specific stipulations--but these do little besides tacking on another hour or two of play for completionists. You can also try to complete the Optional Objectives on each level, though they don't really add much in the way of variety. There's head-to-head online multiplayer with up to four people, but the lack of local play limits its value. Plus, in a game like this, the asynchronous act of lording a high leaderboard position over your friends is more satisfying than setting up a competitive match could ever be.

And that's a problem, because the act of going for points has been taken down a peg (no pun intended but, wow, that one works really well) from the Xbox 360 version of its predecessor. There aren't any leaderboards in Peggle 2, an omission that I don't even remotely understand. Popcap knows you'll want to get a lot of points; it tells your Xbox One to record a gameplay clip every time you rack up a high score, and half of the Optional Objectives push you to aim for high points. But there's no way to compare your score to that of your friends. It's 2013, we're playing on next-generation consoles, and Peggle 2 lacks the most basic of social features. It's mind-boggling, and borders on unacceptable.

When you nail the perfect shot and hear "Ode to Joy" swell up, you're not going to be cursing the lack of leaderboards. When your ball makes a lucky bounce and earns you an extra shot, you're not going to be angry about the limited number of Masters. But once you see all the flashing lights, and once you've listened to the wonderful music, and once the hilarious characters have outstayed their welcome, you'll definitely wish there was more to do. It's immensely charming, and the core of the game is fun enough to keep you grinning (and yeah, occasionally joy-puking rainbows) for hours on end. But those hours end sooner than you'd wish, and you might not be coming back for more as frequently as you might hope.