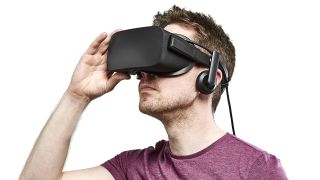 Been tempted by the Oculus Rift VR headset but been put off by the price? OK, the headset itself isn't on sale - it got a price drop earlier this year - but a stack of Oculus games now have up to 80% off on the Oculus Store which definitely makes the investment that little bit easier on the old bank balance. From today until April 4, EVE: Valkyrie has 50% off making it £22.99, Elite Dangerous is now £29.99, and Project Cars is down to £19.99.

The best of the bunch though is the 1 year anniversary bundle that includes 11 launch titles for a one-off fee for £69.99. This bundles up EVE: Valkyrie, Project Cars, RPG Chronos, Radial G: Racing and even the brilliant multiplayer bomb defusing Keep Talking and Nobody Explodes. Is this enough to push you over the virtual reality edge? Here are the best prices on the Rift if you haven't yet taken the plunge.