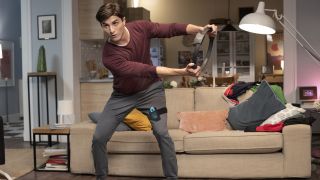 Ring Fit Adventure might not be Nintendo's first attempt at making a fitness game, but it is certainly its most endearing. Whereas Wii Fit and the Balance Board were brilliant at turning your living room into a mini-gym in an approachable way, Ring Fit Adventure and the Ring-Con are more versatile in every sense. Ring Fit's exercises are weaved into a surprisingly delightful RPG where you take on a buff dragon, while the Ring-Con can track a greater variety exercises, getting you to work up a sweat in a way that the Balance Board struggled to.

What excites me most about the time I've spent with Ring Fit so far is the possibilities that exist beyond it. Nintendo have an accessory that could be used for any type of game, while the Switch's portability means fitness games released on it have an advantage those released in the Wii's heyday never had. Simply put, Ring Fit Adventure seems like the ideal spark for a fitness game revival.

Wii fit as a fiddle

In some ways, it's surprising that fitness games need a revival. When Wii Fit and the Balance Board launched back in 2008 in America and the EU, it was an instant sensation among Wii players. It might not have been the first example of an 'Exergame', but its simplicity made it easy to jump into Wii Fit and get cracking on with its exercises, while its adaptability made it easy for other developers to create games for it.

In the space of a few years, fitness games such as EA Active, My Fitness Coach, and er, Jillian Michaels' Fitness Ultimatum 2009 followed in Wii Fit's footsteps, helping to expand the genre rapidly. Meanwhile, other games like Wii Music, Rayman Raving Rabbids: Party, and Skate It made full use of the balance board, helping to turn it into one of Nintendo's most successful peripherals.

As of 2012, over 32 million balance boards had been sold, and considering they were bundled with Wii Fit, it put Nintendo's fitness software in plenty of living rooms. Like the Wii's motion controls, the novelty and accessibility of the board made non-traditional gamers eager to try it, and even if it didn't appeal to Nintendo's typical audience, there's a lot to like about the way it gently gamified fitness. Whether it's throwing punches to a beat or practicing stretches with the Trainer (who's since joined Smash Bros. to put all those push-ups to good use), Wii Fit felt like a handy way of getting exercise in away from the gym.

It wasn't just the Wii that had a thriving fitness genre though. As Kinect and PlayStation Move brought motion controls to Xbox 360 and PS3 respectively, they also helped bring a raft of fitness games to each console. Nike+ Kinect Training was the 360's answer to Wii Fit, which was a more serious take on fitness games. It still got you working up a sweat, but it lacked Wii Fit's playfulness, lessening its appeal for the fitness-curious.

Meanwhile, fitness games such as EA Active 2, UFC Trainer, and Zumba Fitness across all three consoles helped to maintain fitness game momentum. The fact that some games focused on pure fitness, while others followed Wii Fit's gamification model meant that players were spoiled for choice with fitness games no matter what console they had.

However, if the Wii created the ideal market for fitness games to thrive in, then the next generation was, to put it kindly, the worst possible one for them. When the Wii U launched in 2012, the audience didn't take to Nintendo's console in the way they did with its predecessor, and the same can be said for Wii Fit U. Despite its backward compatibility with the balance board, it apparently sold less than a million copies – although that information comes courtesy of VGChartz.com, so feel free to take it with a pinch of salt. Still, it should be clear for all to see that the audience that adored the Wii failed to make the transition to its successor in any meaningful way.

Exploring Ring Fit Adventure, Nintendo's latest attempt to get us up off the couch.

Similarly, when the Xbox One launched in 2013, the integration with the new Kinect camera sparked a backlash from gamers. While games like Xbox Fitness and Shape Up offered next-gen workouts at launch, the negativity around the Kinect camera saw Microsoft ditch it as part of Xbox bundles early on, while the Xbox One S and X don't even have a port for the peripheral. Considering most fitness games relied on the camera, it meant those games slowly disappeared from the console.

Then there's the rise of smartphone fitness apps and games. As smartphones became more ubiquitous, so too did fitness apps that you could take anywhere on the go. One early breakout hit was Zombies, Run. It places you in the middle of a zombie apocalypse, weaving a story while you jog along in the real world, collecting virtual supplies for your base in game. If Wii Fit succeeded because it offered a type of fitness experience that was more accessible than going to a gym, then apps like Zombies, Run offered the same benefits.

Which is where Ring Fit Adventures comes in. Like Wii Fit, it's playful in its approach to gamifying fitness, but this time, it has taken the concept and doubled down on it. You're running through a fantasy world and battling enemies with specific exercises, a far cry away from copying the Wii Fit Trainer. Meanwhile, the Ring-Con offers the same flexibility the balance board did. Stretching it in different directions or rotating around like a wheel is as easy to understand as standing on a board.

Plus, there are plenty of possibilities for its use outside of Ring Fit. Imagine an RPG where you could use the ring like a bow, or a pirate game where you could steer your ship through choppy waters. Ring Fit shows plenty of ways you could use it, and it's hard to not want to see developers try to find even more opportunities with the use of the Ring-Con.

On top of that, if the advantage that smartphones had with fitness apps was their portability, then the Nintendo Switch has negated it. The fact you can take it anywhere with you means that you can also take Ring Fit as well. The Ring-Con and leg strap are (just about) travelable, so if you wanted to get some squats going in Spain or press-ups in Portugal, then you can.

But most importantly, Ring Fit Adventure offers a template for future fitness games after a barren spell. By offering an experience that is as fun as it is sweaty, it recaptures what Wii Fit did so well, and improves on it. Here's hoping that what follows has us jogging down this path.

See what new titles are on the near horizon for 2020 with our list of all of the upcoming Nintendo Switch games.