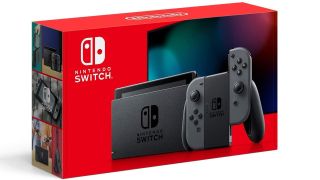 The new Nintendo Switch model with improved battery life is in stock and available for purchase on Amazon right now. Going for the standard $299.99 price on Amazon, this will be the ideal console to pick up if you want to play your games both on your TV and in handheld mode. Though Nintendo Switch Lite pre-orders are open right now and it has plenty of its own selling points, you won't be able to use that system in docked mode - it only works as a handheld.

Even if you already own a Nintendo Switch, you may be interested in picking up this new hardware revision. Though it's largely identical to the previous version of the system, this one comes with revised internal components that allow for longer play without plugging in. According to Nintendo's specifications, the new Switch should last for 4.5 to 9 hours of play depending on the game, compared to the old model's 2.5 to 6.5 hours.

Only the Grey Joy-Con version is available on Amazon so far, but we'll let you know when we spot its Neon Blue/Red counterpart.

If you're hunting for Nintendo Switch bundles yourself, you should look for two details to make sure you're getting the latest version. The battery-improved Switch has model number HAC-001(-01), while the old version lacks the (-01) at the end. Handily, the packaging for the new Switches also features revised box art. It has a solid red background behind the console rather than the old "white with TV" background.

Find something to play on your new console with our list of the best Switch games.