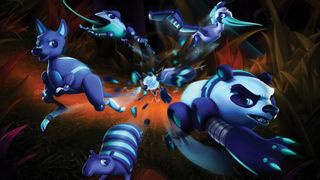 A 2D platformer starring robotic animals in a neon dream world, with just a dash of Metroidvania for flavor

The satisfaction of a well-timed bounce off an enemy's head through a hoop into a cannon, then rolling up a wall to collect gems; '90s platformer stuff

At first blush, Mekazoo seems like the perfect antidote to a painful longing for action-oriented 2D platformers - you know, the type of game where jumping on a robot's head causes it to explode and maybe free a tiny forest critter trapped inside. The robotic armadillo you play as has a good feel as it bounces along or rolls into a ball. The cannons you jump into fire you out with satisfying force, and the soundtrack has you nodding along all the while. And for some of you out there, a good platformer is already enough. But there's another layer going on that slowly peels back over the course of the game, and it's this feature that elevates Mekazoo above other such games.

As you progress through Mekazoo's mostly inferred plot, you'll unlock more animal forms to transform into: a frog, a kangaroo, a panda, and a stork. Each animal has a unique ability to help you through a level; the frog can use his long tongue to attack from a distance or grab special obstacles, the armadillo can roll into a speedy ball and be fired from cannons, the kangaroo has a downward stomp and can jump off walls, etc. Each level, you're given two forms to switch between. You can usually complete a level even if you never swap, but skilled players are going to want to switch almost constantly. Not just to get the best score and time, but have the most fun.

Let me put it this way: Doing a Sonic-like spin dash up a ramp, stopping, turning, and doing another spin-dash up a second ramp is fun. But doing a spin-dash up the ramp, bouncing off the wall, transforming into a frog, swinging off an enemy like a trapeze artist, turning back into an armadillo and - using the momentum you generated from the tongue-swing - rolling up the second ramp is way more fun. Either way, you have a satisfying platformer with obstacles that test your reflexes, but take advantage of Mekazoo's systems and you'll find far more opportunities to prove yourself and show off.

There are branching paths and hidden routes littered throughout Mekazoo's neon-tinted world as well. Along with simply completing the level, you can chase optional objectives like clearing the path of all enemies, finishing without taking damage, beating the course within a time limit, or finding secret gems. I personally enjoy the latter two the most, as getting the best time often means finding shortcuts, and collecting gems requires exploration. Levels are much larger than they first seem, and you'll need to do multiple runs to see all of one.

Since some animal forms can reach areas that others can't, you start thinking of each set of ramps, cannons, bounce pads, and enemies as puzzles to be solved. It feels jarring at first, but Mekazoo does well enough with its level design that you memorize the weight, feel, and special ability of each animal and start swapping between them without thinking. There's a great sense of zen focus once you get in the heat of clearing a series of obstacles and you've familiarized yourself with your animals. You can also take this mindset one challenging step further by playing the couch co-op mode, where each of the two players controls a different animal.

I would be remiss if I failed to mention Mekazoo's psychedelic-but-jazzy music selection. This is Daft Punk by way of the Sonic the Hedgehog 3 soundtrack. There's brassy trumpets mixed with synthetic drums, wailing guitar riffs, and chiptune sound effects layered throughout, and I all but guarantee you'll find a favorite melody. I've got one going off in my head right now.

Everything flows together into one satisfying package that feels fulfilling. If Mekazoo was just the next platformer, it would still be worth checking out. The fact that it's much more than that means you should be playing.