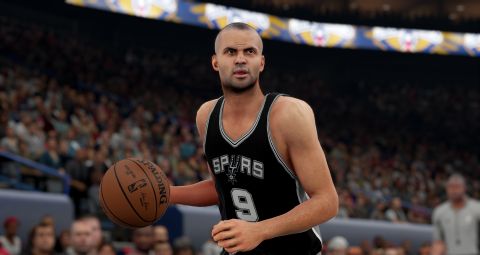 NBA 2K16 is what all sports games should aspire to be. Not only is it the most ambitious title of its kind - offering expansive single player, multiplayer, cooperative, offline, and online experiences - it does so in a way that simultaneously respects core basketball aficionados and casual hoops fans. While each of the deep game modes has items I can quibble with, the whole of NBA 2K16 is much greater than the sum of its parts. If - and this is a big if - its online servers manage to stay afloat, NBA 2K16 is not only the best sports game of the year, but one of the best of all time.

In a game jammed with content, its fundamentals shine brightest. The 5-on-5 basketball is the most polished and intense sports simulation I’ve ever played. It’s immediately noticeable, as defenders are on top of you once you get into the half court, pressuring you to execute plays and be smart with the ball. You need to use all the tools available to you to get open looks by calling for screens and pick-and-rolls, relying on your CPU teammates to make timely cuts and search for open space. Even if you don’t call plays every time down the court, the freestyle offense that the teams automatically run emphasises the strengths of the players on the court, making proper rotations a critical factor to success.

The physicality of low-post play and the off-ball battles between individual players highlight the sense that there is more intelligence happening under the covers than ever before. It’s particularly evident when you play with different teams; New Orleans’ Anthony Davis will constantly wrestle with his opponents to get proper positioning in the block, while Golden State’s Steph Curry and Klay Thompson trade sprints across the court to find open looks along the perimeter. 2K16 feels alive and intelligent.

The NBA 2K series has always been known for its excellent presentation and visuals, and takes that to the next level this season. Player introductions, rocking arenas, slicker-than-ever score overlays, and in-game commentary are world class. Current-day player models and behaviors look spectacular; you know exactly who each person is the instant you lay eyes on them. Steph Curry’s mouthguard-chomping ritual at the foul line is just one small example of the care and detail that clearly went into them. A surprising number of classic players look great too; Michael Jordan and Scottie Pippen are unnervingly realistic in look and play style.

One of the biggest concerns about the NBA 2K series is its usage of VC, the in-game currency that powers many aspects of the game. It’s tightly intermingled in MyPlayer, MyCareer, MyTeam, and even playing one-off online games in order to boost attributes, get new apparel, and build out your personal gym. Most importantly, VC can be acquired by spending real-world cash. NBA 2K16 delights in presenting you with opportunities to keep spending your hard-earned money to get new stuff; be aware what VC is and how easily you can get pulled into a buying loop.

Of course, it wouldn’t be NBA 2K if they didn’t change some of the core controls. Again. The biggest barrier to newcomers remains its intensely complex and confusing control scheme, and NBA 2K16 has only exacerbated that issue. While shooting and passing remain tied to the same buttons, play-calling, screens, and low-post play have all been moved around. It’s very confusing to someone like me who spent countless hours in 2K15’s courts. I understand that the development team likes to tweak things to optimize the experience, but I’m hard-pressed to agree that, for example, calling plays with the D-pad is better than with the left bumper; in fact, I would argue the opposite. It’s also made the pick-and-roll harder to run, as you now have to combine the right trigger and the left bumper to properly execute - all the while using the right stick to move your player.

One of the most anticipated features of NBA 2K16 is the Spike Lee-directed My Career mode. It’s an ambitious effort, and smartly split into two sections; the first is heavily story-driven, following your rise from high school through college and your first years in the NBA. There is some basketball to be played - a handful of short games at each level - but much of your time is spent watching the often-intense scenes play out between your player, his family, and others who are clamoring for his time and money.

There are dozens of things that simulation-leaning fans will have issues with, such as the timelines between joining the NBA and becoming a free agent, or how terrible performances on the court won’t impact how you’re celebrated by your hangers-on. The story itself has plenty of eye-rolling moments, but is also punctuated by a series of very intense - and unexpected - performances and powered by impressive motion-capture technology that shows off terrific character facial expressions and emotion. Once the main ‘film’ section is complete - about a four hour timeframe - you’re free to move throughout your career in a more traditional way by playing all the games, upping your attributes, and building out your home court with all sorts of accoutrements. It may be a bit on the corny side, but I love it.

My favorite addition this season is online leagues; they have been missing since the start of the PS4/Xbox One generation. Not only can you play online with your friends, in a league with tracked stats and championships, but there is complete freedom to allow classic teams and current-day squads to intermingle. It sets up limitless options for a good time, and the simplicity with which they’re implemented means that I’ll be spending much of my time in there.

NBA 2K16 is absolutely brimming with content; so much so that it’s virtually impossible to experience it all. Its core basketball experience is spectacular, and it takes big chances with an expansive story mode, a multitude of online options, and a presentation that is second to none in the sports game space. The only lingering doubt is its ability to keep its online infrastructure up and running from Day One, as many of the game’s features are tied to the 2K servers being operational. It’s the most ambitious sports game ever made, and a must-play for anyone who’s ever picked up a virtual basketball.