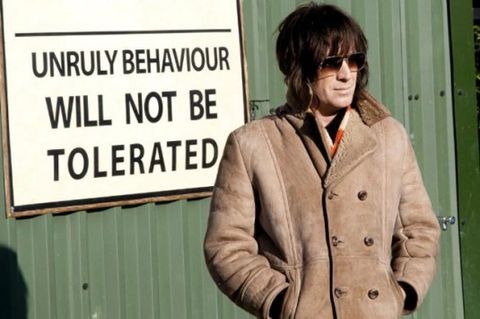 A dealer is just someone who buys more than he can smoke,” intones Rhys Ifans as dope-smuggling raconteur (and fellow Welshman) Howard Marks in a roach-dry voiceover. “And I tried to smoke it all – there was just too fucking much of it!”

It’s a fitting summary of our hero’s pot-based proclivities, but it doesn’t quite ring true.

Marks’ picaresque rap sheet saw him running guns with the IRA ’s Jim McCann (an eyebrow-raising David Thewlis) and having his teeth pulled in a US prison, far away from his long-suffering wife (Chloë Sevigny). Shouldn’t he – and we – have learned something a little weightier?

Beginning well, with Marks’ transition from the pipe dreams of rural Wales to the hash pipes of Oxford University, Bernard Rose’s (Candyman) uncritical odyssey has our hero entranced by the drug lifestyle – the beautiful B&W plumes of smoke curling through the corridors; the pretty girls shimmering in sepia.

Sadly, the decision to have the 42-year-old Ifans play Marks as a student makes him look like Ronnie Wood pursuing waitresses, and an over-reliance on back projection means the film’s visually bold stabs at retro-cool can look a bit cheap.

As Marks graduates to a life of high crime, the film starts to lose some grip. It turns out international drug dealing isn’t quite as glamorous as Blow et al would have you believe; it’s all fraught phone calls, air freight calculations and customs officials.

Though Ifans excels and Omid Djalili and Crispin Glover make welcome cameos, there’s something missing: an authorial voice to pick apart Marks’ endless self-aggrandising. As such, he ends up coming across onscreen as the unlikely lovechild of Robin Hood and Andy Dufresne.

Viewers won’t leave with a bad taste in their mouths thanks to Ifans’ relaxed, cheeky, hard-todislike performance.

But even his chilled swagger isn’t a thick enough smokescreen to disguise the lack of cold, objective insight.