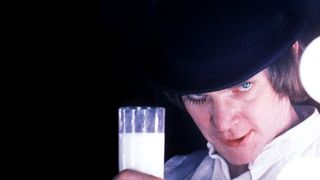 Putting the audience through the wringer has been the aspiration of some of art’s greatest creatives. Hitchcock swore by suffering. Theatrical pioneer Antonin Artaud believed that the perfect work should leave at least one audience member dead from shock. And modern cinema has been running with that baton for years. That’s not to say that every film on this list is a solid gold winner, of course. Disturbing extremity is, also, a refuge of the lamest and most immature creative attention seekers, so expect plenty of unsettling trash as well. But, whether good, bad, or somewhere in between, what you can guarantee is that the following 25, whatever their genre, are going to make you feel decidedly grim, and weird in no small way.

You'll find some of these in our best Netflix movies list.

And some on our best Amazon Prime Video movies list.

Backstory: Serial grimster Lars von Trier's deliberately provocative and hugely upsetting film, with Willem Dafoe and Charlotte Gainsbourg as a dysfunctional grieving couple. Following the death of their son, the woman becomes inconsolable, leading the man to attempt extreme exposure therapy by taking her to a woodland cabin - nature is one of her deepest fears - in order to attain some manner of healing. It doesn't work, naturally, and instead leads to unhinged, sexually charged, mutilating fallout with potential supernatural overtones.

Backstory: One-time star director of the French extreme new wave Alexandre Aja helms the remake of Wes Craven’s 1977 original mutant hillbilly exploitation horror. A family on holiday suffer a tyre puncture and get stranded in the desert. Alas, they are stranded in the middle of sadistic cannibal killer territory and, after a deceptively slow-burn first act, things rapidly, and without warning, get starkly horrific and resolutely do not let up.

Sickest scene: The sequence in which the full-scale assault really begins. After steady teases that Something Is Not Right – culminating in a suicide – the family is awakened by the screams of their dad being burned at the stake just outside their camper van. From that point on it’s a relentless frenzy of violent attack, rape, shootings, stabbings, and forced lactation at gunpoint. There were notable walkouts when the film first opened in America. When you watch the movie, you can pinpoint without any doubt which scene incited those walkouts.

Backstory: An ex-army hitman and his buddy accept a mysterious, multi-part job – the titular list – from even more mysterious employers. As they travel around the country carrying out their task, they encounter – via grittily, unglamourously real, kitchen sink film-making - some of the absolute worst of humanity, while doling out some serious violence of their own. Meanwhile, increasingly strange events are unfurling around them, and things are beginning to get very weird at home.

Sickest scene: Probably the scene in which protagonist Jay executes an archivist of paedophilic video material - having sat through one of his ‘films’, the soundtrack of which we hear just enough of to be sickened -  with a hammer, as the monster himself mysteriously thanks him, in a decidedly placid, earnest fashion.

Backstory: A jolting French torture piece with endlessly jarring twists and turns. It starts out as basic exploitation stuff - a traumatised young woman kills a family she believes held her hostage as a child - before repeatedly changing direction toward new, increasingly upsetting horrors, just as you get used to each current nightmare. Bewilderingly unpleasant. But also very clever, and actually brilliant, if you have the stomach for it.

Sickest Scene: The final, climactic scene, in which our surviving heroine Anna is beaten and skinned alive in order to provide witness to the afterlife for the film's secret society.

Backstory: The low-budget Belgian serial killer mockumentary, which follows the charming but homicidal Benoit as he philosophises, explains his methods, and even demonstrates them for an increasingly complicit camera crew.

Sickest Scene: Benoit saves a bullet by scaring an old woman into cardiac arrest and slowly watches her die.

Sickest Scene: Not exactly sick, but one that'll stay with you. The Earth Mother emerging from the suicide corpse of God and arousing his dead body in order to impregnate herself. And they say Hollywood can't do romance.

Backstory: A short film which packs in plenty of open-mouthed 'Whah?' into its 30-minute running time. The film is simply and clinically shot, focusing on a mortician working on a car crash victim who careful cuts then 'romances' the body. It is not romantic.

Sickest Scene: The chilling closer, in which the mortician feeds the victim's stolen, pureed heart to his dog as he settles down to some TV.

Backstory: Petulant gore-monger Tom Six returns with an even more petulant – and far gorier – sequel to The Human Centipede. In this self-aggrandising follow-up, a disturbed fan of the original movie decides to make his own, 12-person centipede, and sets about kidnapping, killing, and maiming his way to his goal. Along the way, we get a whimsical tale of long-term sexual and domestic abuse, every grotty human vice you can think of (depicted as grottily as possible), and a protracted crescendo an order of magnitude more graphic than that of the first film.

Sickest scene: Easily the climax of Martin’s scheme, which takes in staple guns, sliced ligaments, ripped out tongues, explosive diarrhoea, barb wire rape, and a dead baby. But absolutely zero point or purpose. Seriously, this thing is one of the most vacuous, most self-congratulatorily grim things you’re ever going to watch. So maybe save 90 minutes and don’t.

Backstory: Stanley Kubrick's infamous adaptation of the Anthony Burgess novella on free will and human rights. Removed from distribution in the UK by Kubrick himself - not banned, as has been readily reported - after death threats followed a media storm. Now available, the dazzling orchestration of violence (in turns brutal, cartoonish, almost musical, and carried out with dark whimsy by its perpetrators) still shocks.

Sickest Scene: The toughest to watch are the scenes of Alex's enforced indoctrination: wide-eyed close-ups of Malcolm MacDowell's panicked, contorted features that almost make you feel sorry for him, as you start to question how good the good guys really are.

Backstory: This is actually just part two of the seven-strong Guinea Pig series from Japan. Flowers Of Flesh And Blood is a masochistic faux snuff film, in which a man dressed as a samurai cuts up a woman before adding her pieces to his extensive collection. It was so convincing that Charlie Sheen informed the FBI he believed it to be real after a viewing in the early '90s.

Sickest Scene: The killer joyfully posing his disembodied victims head with the rest of his collection, a frantic release after an age of tortuous cutting.