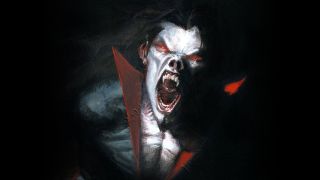 Sony’s Spider-Verse welcomes its newest addition later this year when Morbius flies into cinemas. The first trailer for the character’s solo flick gave us an insight into the Spider-Man villain's world – one that could potentially link to the MCU.

Morbius isn’t some brooding Twilight-esque bloodsucker, though. This morally complex character has a rich comic history, unique superpowers, his own rogues' gallery, and run-ins with Marvel’s famous webslinger. If you're not up to date with Morbius' comic-book history, then fear not as we're here to help. Here's everything you need to know about the Living Vampire.

Morbius wasn’t always a vampire. Like so many other Marvel heroes and villains, he started out as a harmless scientist who experimented on himself and – you guessed it – gave himself superpowers.

Dr. Michael Morbius was a highly-respected, Nobel Prize-winning biologist who suffered from a rare and fatal blood condition that limited his mobility and gave him a sickly complexion. In a bid to cure his debilitating disease, Morbius conducted an experiment – using electroshock therapy and vampire bat DNA – that went unfortunately wrong. Now afflicted by a worse condition called pseudo-vampirism, Morbius is what’s known as a living vampire; a being imbued with special abilities and an insatiable thirst for blood.

His physical appearance changed too. Bat-like fangs, a snub nose, claws, paler skin, and partially hollow bones mean that Morbius no longer looks or feels human, which are valid reasons behind his self-imposed exile from the rest of society.

What superpowers does Morbius have?

Though he isn’t quite a vampire in the traditional sense (no being bitten on the neck by someone else), Morbius does possess abilities you’d associate with one. Superhuman strength, speed, agility, reflexes, and durability allow him to fight harder, faster, and for longer. He was granted night vision, echolocation, and limited flight thanks to the vampire bat DNA, and he’s also able to hypnotise weak-willed individuals.

Like Wolverine, Morbius has an accelerated healing factor that means he can recover quickly from wounds. He’s unable to regenerate limbs, however, and the time it takes him to heal is dependent on how much blood he’s consumed recently.

Morbius is affected by some typical vampire weaknesses. His need to ingest blood is the main one, and his victims die or become severely injured if they’re bitten. There are examples of his victims becoming pseudo-vampires too, but they’re extremely rare cases and they can, funnily enough, be cured using Spider-Man’s irradiated blood.

Direct sunlight also causes Morbius pain, even though it doesn’t burn him, and he can’t turn into a bat. Mystical and religious weaknesses, such as holy water, crucifixes, garlic, and silver don’t affect him though.

Morbius was co-created by Roy Thomas, Stan Lee’s right-hand man, and artist Gil Kane. Before 1970, the Comics Code Authority had denied industry employees from using supernatural characters. With that ban lifted in February 1971, and Lee’s desire for a Dracula-inspired Spider-Man villain, Morbius made his comic debut in The Amazing Spider-Man #101 in October 1971.

Curiously, Morbius’ debut coincided with the first time that Lee hadn’t written an issue in Marvel’s flagship Spider-Man series. Lee was busy writing a screenplay for a science-fiction movie, and handed the reins over to Thomas in his absence. Had Lee not been working on a different project, Morbius may not have seen the light of day.

Morbius’ early run-ins with Spider-Man initially introduced him as a tragic villain. He continued to lock horns with Spider-Man during his embryonic years, but it wasn’t long before he branched out on his own and, like Venom, became an anti-hero instead of a straight-up bad guy.

Starring in a comic series called Vampire Tales in 1973, Morbius went on to play key roles in other comic runs including the Adventure into Fear anthology. It wasn’t until 1992 that he received a standalone series, which launched as part of a crossover series called “Rise of the Midnight Sons”. This allowed Marvel to pair Morbius up with other anti-heroes, such as Ghost Rider, during its 32-issue run. He’s appeared in other Spider-Man series since, including Dan Slott’s Amazing Spider-Man run, and another brief Morbius standalone series in 2013.

Thanks to his solo adventures as an anti-hero, Morbius has amassed his own rogues' gallery. He has a long-standing feud with Blade the Vampire-Slayer – for obvious reasons – and has fought out supervillains including Vic Slaughter, Bloodthirst, and the Basilisk. He’s also battled alongside Spider-Man against deadlier foes such as Carnage. As the saying goes, keep your friends close, but your enemies closer...

What can we expect from the Morbius movie?

Like Venom, Morbius’ big-screen debut will be an origins story. As the first trailer showed, we’ll see the good doctor transform from genius biochemist into pseudo-vampire. It’s likely we’ll get some throwbacks to his childhood too, which will help set the path that leads to him becoming Morbius.

Jared Leto will portray Morbius, and he’ll be supported by characters who have roots in the comics. Martine Bancroft, Morbius’ fiancee and fellow geneticist, is played by Adria Arjona, while Doctor Who alumni Matt Smith will portray Loxias Crown – Morbius’ friend who suffers from the same blood condition, and the likely villain of the piece. Crown is a Hydra scientist in the comics but, with the Marvel Cinematic Universe already integrating Hydra into its world, Crown’s role could change.

Fast & Furious star Tyrese Gibson will play FBI Agent Simon Stroud, who is tasked with hunting Morbius. Stroud has been chasing Morbius since the Adventure of Fear comics, so expect elements of this series to be incorporated into the movie.

Will Morbius meet Spider-Man and Venom?

It’s certainly possible – arguably even probably. Sony has been working on its own Marvel universe for some time, enjoying huge (and somewhat surprising) success with Venom. However, Morbius does something different; it features seemingly direct ties to Disney's MCU.

The Morbius trailer sees Leto's character pass graffiti of Spider-Man with the word “murderer” daubed on it. Now, given the events of the MCU set Spider-Man: Far From Home – where a pre-recorded message from Mysterio claims Spider-Man has killed him and reveals Peter Parker’s true identity to the world – this directly links the two. Yet it's the teaser's final stinger that confirms it.

As the trailer's about to wrap, Michael Keaton suddenly appears. Keaton played Adrian Toomes, aka the Vulture, in another MCU movie (Spider-Man: Homecoming), and appears to be reprising the role here. Are we to believe that Vulture's done the previously unthinkable, and hopped cinematic universe from Disney's Marvel movies to Sony's Marvel movies?

The evidence would point to the answer being "yes", especially when you consider how Disney and Sony were battling over rights to Spider-Man in 2019. The legalities are still somewhat confusing, but chances are this all means Spider-Man and his MCU villains will appear in both universes. This could, we suspect, all lead to a Sinister Six movie – which has long been in the works at Sony.

Morbius in the MCU? Here's why that could make an already complicated universe even harder to follow.