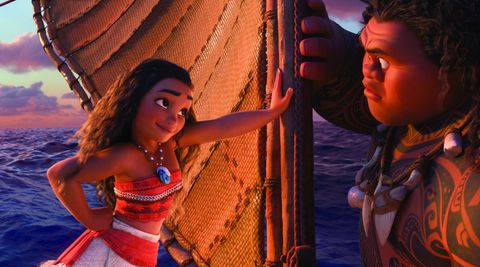 Despite Dwayne Johnson’s solid scene-stealing, the wave-taming Moana gets a true hero’s journey in this South Seas stunner.

Out go princes and primping on this Disney Princess voyage. In comes seafaring and world-saving in a visually dazzling, big-hearted crowd-catcher. Moana, Disney’s first Polynesian princess, is a feisty chieftain’s daughter, determined to save her dying island by finding exiled trickster demigod Maui and forcing him to replace the heart-jewel he stole long ago from the island goddess Te Fiti.

Cheekily self-aware and culturally sensitive, the movie insists she’s not royalty but the ocean’s Chosen One, its Pacific waters parting Moses-style around her to create a shimmering aquarium. Although, as Dwayne Johnson’s Maui observes, “If you wear a dress and have an animal sidekick – you’re a princess.”

Using meaty South Sea myths to craft a strong but simple story, the film initially resembles a pretty patchwork of past Disney hits (like many a Mouse House protagonist, the island-trapped Moana yearns for freedom).

The energy soars, however, when Johnson’s selfish, boastful but amiable Maui shows up to give her the run-around, hell-bent on regaining his lost powers without her pesky quest. In another Disney Princess first, theirs is an odd-couple adventure rather than a love story, more True Grit than true romance.

But while it’s a more than worthy successor, Moana substitutes adventure and empowerment for Frozen’s emotional heft. With an eco-conscious story favouring redemption over outright villainy, there’s just a bit less tugging on your heartstrings. As Disney baddies go, Jermaine Clement’s giant treasure-crazed crab Tamatoa is a ball of fun (‘Shiny’, his Bowie-ish disco celebration of all things bling, is a highlight). But he’s no Ursula the Sea Witch.

Still, the tunes in this toon are tip-top, partly crafted by Hamilton creator Lin Manuel Miranda. The standout earworm? ’You’re Welcome’, a sly world-building boast that proves Johnson has pipes as well as pecs.

Coupled with the extraordinary lush visuals and fluid camerawork – moulding the ocean’s many moods and textures till it’s practically a character – Moana essays a rich, vivid feel. It might not be a whole new world, but it’s a fantastic voyage.

Despite Dwayne Johnson’s solid scene-stealing, the wave-taming Moana gets a true hero’s journey in this South Seas stunner.