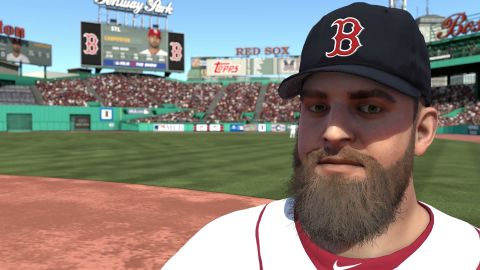 Updated on 5/9/14 Scroll to bottom for full PS4 impressions.

Innovation happens slowly in Major League Baseball, and Sony’s MLB: The Show franchise has mirrored its sport accordingly. Over the course of the PS3 generation, The Show slowly, thoughtfully built modes and features into the game without drastically altering the landscape. This year, several impressive new ideas blow that thought process out of the water, creating exciting new ways to experience baseball that other sports games would be wise to emulate. Unfortunately, its online systems suffer chronic issues, rendering MLB 14: The Show excellent in some ways and agonizingly frustrating in others.

The Show continues to be one of the most visually pleasing experiences on the PlayStation platform. Player models and mannerisms are captured beautifully, with individual batter and pitcher personalities easily discernible. New dynamic hitting and fielding cameras add a nice touch, eliminating the split-second switch to different angles that caused momentary stuttering in the past, and the major league ballpark sights and sounds remain top-notch. The only downside is that when weird things occasionally happen on the diamond--for example, when players and base coaches accidentally meld into each other, it’s a view straight out of a bad horror film--they seem especially noticeable because of the clarity surrounding it.

Another hallmark of The Show is its amazing depth of gameplay options. With multiple, significantly different methods and difficulty levels for hitting, pitching, and fielding, players of every skill level can tailor the game exactly to their tastes. It’s fascinating to poll friends about how they approach their experience; with multiple choices for each discipline, the only thing everyone can agree on is that few use the same combinations. Whether your preference is using the analog sticks, tapping the button, or letting the CPU do all of the work, it’s easy to find an appealing option. The game’s notoriously tough learning curve has been smoothed out too, thanks to an improved Dynamic Difficulty setting that reads and reacts to how well (or poorly) you’re faring. Experimentation breeds satisfaction. While there are positives and negatives with each of the play mechanics listed above, the only area with serious problems is the fielding Throw Meter. It feels utterly useless, as plays that should have been routine for my shortstop and third baseman regularly turned into outs and errors. Not exactly something you'd expect to have happen at the major league level. Thankfully, several other fielding mechanics are available that work just fine.

Two of the most noticeable additions to The Show this season are Player Lock and Quick Counts. It’s not hyperbole to trumpet Player Lock as a visionary new way to experience a sports game; the ability to step into the cleats of individual players at any point in any game in every standard mode introduces a staggering amount of possibilities. Feel like being your franchise’s star slugger for a week? Go for it--then switch over to your closer for the final three outs in every key game. Want to play Opening Day as the entire team then see what it’s like to be your second baseman for the next month? Simple. Player Lock powers a fundamental, spectacular new way to play The Show.

Baseball on the go

The Vita version of The Show is fully interoperable with the PS3 version, as once again you can move your RTTS character, franchise, or season back and forth for when you hit the road or can’t get to your PS3. The Show looks and plays great on the Vita on its own--it obviously has less visual fidelity and fewer replays, though--and is a superb companion to both the PS3 and forthcoming PS4 version. All of your data will be able to be shared by Sony’s three current platforms. No other sports franchise can boast this level of support and portability.

The Quick Count feature starts every at-bat with a pre-determined count in an effort to shorten the length of games; no longer will the pitcher throw every ball and strike in the game. It demands significant concentration and creates newfound pressure in an already-tense atmosphere because every single pitch and swing carries much more weight. While both new features take getting used to, the fact that they’re available in addition to traditional options is welcome.

For years, the most popular mode in Sony’s baseball franchise has been Road to the Show, and this season's version sees two key modifications that make it slightly more interesting. Rookie Showcase lets you improve (or ruin) your position in the draft over three games, and the attribute-building model has been revamped to eliminate the confusing multi-tier attribute rankings of years past. Instead, a much more straightforward numeric system is in place. Otherwise, the meaty RTTS remains mostly unchanged--including its very dry, menu-driven process. It’s time for some new ideas to get you more invested in the life and emotions of your player, especially considering how much time you’ll spend with him. Thankfully, for the first time ever, your guy can be carried forward in future versions of The Show, so this is the last season you’ll have to start from scratch--an excellent feature fans have been requesting for years.

For all its innovations and in-depth modes, however, The Show’s online implementation is far less impressive. The development team has touted a new system built from the ground up to reduce the chronic lag and connection problems that have plagued the series this entire generation, but my experience (as well as that of others I have reached out to) has been very poor. Exhibition matches suffer from wonky timing at the plate and stuttering in the field. The new Online Franchise has been entirely unplayable for me to this point; all of the games I have attempted in this mode have crashed, and a few of these also locked up my PS3. It’s a shame, too, because Online Franchise has some great design ideas--including small, customizable seasons that you play with a group of friends over a short, flexible schedule--but the actual games just don’t work yet. Perhaps one or more of the upcoming planned patches will improve this aspect, but as of now it’s nothing but frustrating. If you’re planning on any significant online action with The Show, it’s impossible to recommend at this time.

MLB 14 The Show is massive. Chock-full of wonderful ideas, beautiful details, and multiple ways to immerse yourself in America’s pastime, it acquits itself strongly in many aspects and implements key innovations that make it fresh once again this season. Unfortunately, a floundering online system is a red flag for those that are counting on that as their go-to mode. If that can be addressed quickly, The Show vaults to the top of the sports game world. If it doesn’t, it remains a bipolar experience that is solely satisfying for offline players.

How does it play on PS4?

MLB The Show’s debut on the PS4 is a transitional title. There are improvements in some of the areas you would expect, especially its visual presentation; player models are much more detailed and the major league stadiums are lovingly rendered. More subtle additions also add to the mix, such as a lighting system that renders various weather and times of day as beautifully as any game I can remember. A lively crowd breathes new life into the background of the action on the field, and a host of interesting camera techniques further extends the visual pleasantry.

On the other hand, there are many places where The Show remains firmly--stubbornly?--rooted in its past. In-game commentary is instantly familiar to anyone that’s played the game in recent seasons, with recycled and repetitive dialogue becoming apparent almost immediately. Pre- and post-game sessions are also identical to its PS3 sibling, while many of the player and umpire animations give me déjà vu. In essence, The Show on PS4 feels more like an HD remake than the built-from-the-ground-up title.

Sports games do not have the best history with console launch window titles, so it bears mentioning that The Show is feature-for-feature complete with the PS3 version. Considering the massive amount of modes, settings, and overall content--especially the new player lock and quick count options--that is laudable. However, there is nothing new from a feature or mode standpoint for next-gen owners to experience, with the exception of some new animations and menu overhauls. Additional Road To The Show or Playoff features would have been a nice gesture to those who waited the extra month for the PS4 release.

One key area of improvement so far is the online play; on the PS4, it is…OK. Not great, not good, but functional. Unlike the PS3, which was riddled with disconnections and unplayable lag, The Show on PS4 has been much more stable. To be sure, it does not play nearly as smoothly as it does offline, and there are regular moments of ‘what the?!?!?’ as players stutter or warp from one spot to another. If Sony is serious about fans of The Show playing online-only modes such as Diamond Dynasty or Online Franchise on a regular basis, a lot of work still needs to be done here.

There is much to like about MLB 14 The Show on the PS4, and plenty of content to be explored. Even so, it’s obvious that the development team is just getting started down the next-generation road.