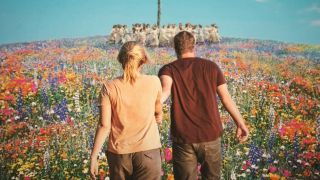 If your first thought after watching Midsommar was "I want some more" (or maybe your second thought after "What the hell just happened") you're in luck. Writer and director Ari Aster revealed in an official Reddit ask-me-anything thread that he's working on an extended cut for the film right now, and that it will be "at least 30 minutes longer" than its cinematic counterpart.

Aster has previously revealed that about an hour and 20 minutes worth of footage was cut from his initial version of the film, putting its total runtime at around 3 hours and 50 minutes - dwarfing even the likes of Avengers: Endgame. Aster's extended cut would boost the runtime from about 2 and a half hours to just under three, which feels quite a bit more approachable. Just as a guess, the extended cut will probably make things even more trippy and threatening.

Elsewhere in the Reddit thread, Aster answered questions about his plans for his next production, which will either be "a zonky nightmare comedy or a big, sickly domestic melodrama." In case you're not ready to believe the guy behind Hereditary and Midsommar was really being serious about that zonky comedy thing, he also said he's interested in making a full-on comedy "hopefully very soon" in his career.

What kind of strange aesthetic will he explore next, after the dark oppressiveness of Hereditary and the day-bright horror of Midsommar? "Cheesecake Factory." I think Ari Aster is my favorite modern filmmaker now. And lastly, don't worry - even if Aster goes for comedy next, at least one recurring element seen in his previous feature films will remain.

"Head trauma will ALWAYS have a place in my films," Aster assured his adoring public.