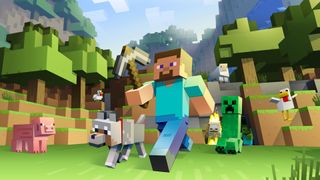 When the current generation of consoles launched, did you purchase an Xbox One while your friend picked up a PS4? O, cruel fate! You and your best buds, destined to never play together unless one of you acquiesces and buys the other system! Well, Microsoft is trying to change that, and is still in talks with Sony about enabling cross-platform play.

Speaking to Gamereactor UK at Gamecom 2017, Xbox head of marketing Aaron Greenberg said, "Absolutely, yeah. We're talking to Sony [about cross-play], we do partner with them on Minecraft and of course we would like to enable them to be part of that; one community, to unite gamers. So we're talking to them and we're hopeful that they'll be supportive of it."

Developer Psyonix recently enabled cross-play in its game Rocket League, allowing players to drop in and out of matches between PS4 and PC or Xbox One and PC. When the Nintendo Switch version comes out, there can also exist cross-play between Xbox One, PC, and Switch, leaving Sony as the odd one out. Psyonix has stated that the infrastructure is there and ready, all that remains is for Sony to flip the metaphorical switch.

Microsoft's own Minecraft is also making the leap into cross-platform play with the "Better Together" update. The patch is currently in beta and not available on Xbox One yet, but when it launches in full, players on PC, mobile, Xbox One, and Nintendo Switch will be able to join each other and play together. Once again, Sony would be the only remaining holdout.

There's plenty of pressure from fans of these games for Sony to get with the program, but we'll have to wait and see if the company will ever agree. If you want it to happen, cross your networks-- I mean, fingers.