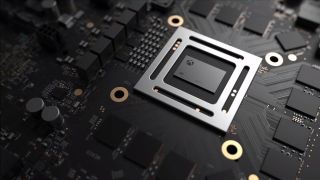 In 2007, Microsoft released the Xbox 360 Arcade, designed to lower the barrier to console gaming as the cheapest entry level model on the market. The original 360's hard drive was sacrificed in favour of a more affordable 256 MB memory chip, which left the console incapable of backwards compatibility but, other than that, the Xbox 360 Arcade was a great product, showing a company eager to enfranchise its technology to as wide an audience as possible.

The 30 best Xbox One games

That's apparently the codename for a second console in the works at Microsoft, one that intends to invest in the streaming-only future of interactive entertainment, according to a new report from Thurrot, (which has accurately leaked industry information before.

According to this report, Scarlett Cloud is a game streaming box/subscription service that'll be a lot cheaper than traditional Xbox consoles, utilising cloud technology to provide high quality gaming with little computational power from the box itself. Instead, most of the software will run externally via streaming, as part of a subscription service similar to Netflix or what Nvidia currently offers with the Nvidia Shield.

This would make sense for Microsoft, which has been finding much more success with digital subscription services like the Xbox Game Pass than actual hardware sales, and corroborates with Phil Spencer's previous comments affirming a belief in streaming as the future of video games, in which he also confirmed that the company was developing the technology for upcoming hardware.

Interestingly enough, reports of a similar product from Google have also recently surfaced, which could pit Microsoft against a new industry titan alongside its traditional competitor in Sony. Scarlett Cloud will apparently release in conjunction with the traditional Xbox One successor, Project Scarlet, which Thurrot states is in 2020, just two years from now.

If that's the case, it's likely that we'll hear more about both products by E3 2019 at the latest, though timelines are always subject to change. After multiple false starts with the Xbox One, which Spencer et al are still paying the price for, it sounds like Microsoft is planning to play the long game with Scarlett Cloud, and it has every chance to pay off for the beleaguered brand in the future.

But enough about Scarlett, here's every upcoming Xbox One game scheduled for 2018 and beyond.