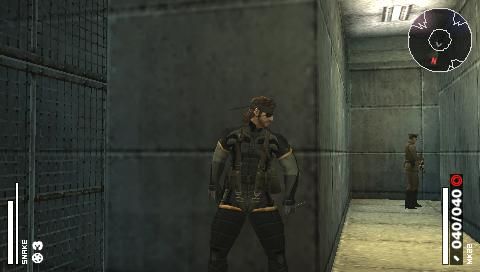 It took a while, but Metal Gear fans with PSPs finally have the game they've been clamoring for. Metal Gear Solid: Portable Ops, a direct sequel to Metal Gear Solid 3: Snake Eater, ditches collectible cards and strategy in favor of straight-up stealth action. But while sneaking around and shooting guards has a familiar feel to it, Portable Ops isn't quite the epic you might be expecting.

Portable Ops feels like what you'd get if you took the Metal Gear Online game from MGS3: Subsistence, simplified it for the PSP and then built a single-player adventure around it. The game is mission-based and nonlinear, the missions themselves are short and to the point, the camera is fully controllable and the action is less complicated and faster-paced. Oh, and there's a huge emphasis on multiplayer deathmatches.

That might sound a little disappointing to series fans, but rest assured that Portable Ops is anything but shallow. It delivers all the story, character development and tense action fans have come to expect from Metal Gear. And as an experience tailored to the PSP, it works beautifully, packing in more features than perhaps any other handheld game to date.

Portable Ops opens in the mid-1970s, years after the events of Snake Eater. Pulled forcibly out of retirement - this time by the bad guys - Naked Snake (aka Big Boss) finds himself stuck on a remote Colombian peninsula controlled by a madman named Gene. Gene has big ideas, and he's plotting to hold the planet hostage with a walking, nuke-equipped tank called - you guessed it - Metal Gear.