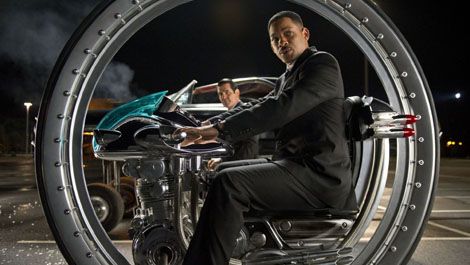 Rumours of script problems, cast changes and shooting delays have circled MIB3 since the cameras started turning. So it’s hardly a surprise to find Barry Sonnenfeld’s belated threequel an average affair that, while improving on MIB2 , makes you wonder why he bothered.

Things kick off promisingly with a jailbreak sequence that has hairy villain Boris (Jemaine Clement) sprung from a maximum-security moon prison by a slinky Nicole Scherzinger.

Back on earth the torpor sets in, something hardly alleviated by writer Etan Cohen’s baffling decision to reintroduce Will Smith’s J and Tommy Lee Jones’s K as grieving mourners heading to a memorial for Rip Torn’s Zed.

K’s inadequate eulogy is meant to initiate a story arc predicated on J’s desire to know his taciturn partner better. But all it does is steep the first third in a funereal mood exacerbated by Boris leaping back in time to erase Jones from existence.

A shoot-out in a Chinatown eaterie typifies the tonal uncertainty, the pleasure of watching Rick Baker’s wacky aliens zapped into slime undercut by the off-puttingly sadistic sight of K slapping the manager’s face with an extra-terrestrial crustacean.

Weirdly, however, what follows fails to take advantage of the new pairing or the retro setting as J and K Junior chase Clement from Coney Island to Andy Warhol’s Factory to the Cape Canaveral launchpad of the Apollo 11 moon module, there to make a fateful discovery that has the whiff of a last-minute, Smith-instigated rewrite.

With a mouth full of teeth and a quip for all occasions, the Flight Of The Conchords star is the most successful addition. MIB3 could have used more of Clement and less of Michael Stuhlbarg’s Griffin, an alien clairvoyant who can see every parallel ’verse simultaneously – including, presumably, the preferable one in which it wasn’t greenlit.