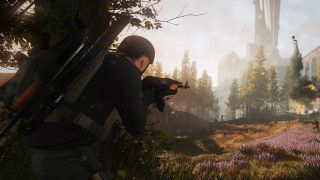 The battle royale game that promised to let 1,000 players fight to be the last one standing across an ever-evolving world didn't stick the landing. Automaton, the developer of Mavericks: Proving Grounds, announced in an update to the bottom of its website that the studio has entered insolvency (bankruptcy in US legal parlance).

"Please be advised that due to insufficient funding, the development of the Mavericks: Proving Grounds game has now ceased," the website states. "The joint administrators are in the process of licensing the Deceit game so there will be no change in the live operation and provision of this game."

Deceit is an online shooter that combines multiplayer action with elements of social deduction games like Mafia/Werewolf. It was the only game to be fully released by developer Automaton since the studio was established in 2015, though it was also teasing another concept called "Project Y: Next-Generation Fantasy".

Mavericks' goal of thousand-player matches was ambitious by itself, and the game was also meant to include dense environments that were massively destructible, allowing players to reshape the flow of the map. Even that was just the start; Mavericks' battle royale experience was planned to build up and out into an open-world RPG in the years after it arrived.

"We're excited about this huge upcoming genre - there's a lot more to come," Automaton CEO James Thompson told GamesRadar back in March 2018. "What's out there on the market is just the best you can do with the last generation, in a way. We're looking to explore a lot of different things with the world and everything else to make a multiplayer world that's really tactical and engaging."

Thompson said in the same interview that Mavericks' future prospects were all the brighter because the studio "spent a couple of years on the background technology for the engine, so the limitations that are in place for other games aren't in place for us". I hope all that work doesn't end up going to waste.