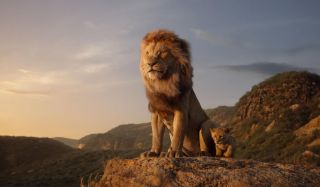 What exactly do we call Disney’s remake of The Lion King? It’s definitely not live-action, since the entire film (save for one, secret shot) was created using CGI. But it doesn’t feel quite artificial enough to be called animated, either. It’s a problem that Disney’s own executives haven’t quite figured out. In an interview with The Hollywood Reporter, the studio’s President of Production, Sean Bailey, described it as an entirely “new form of filmmaking”, adding: “Historical definitions don’t work. It uses some techniques that would traditionally be called animation, and other techniques that would traditionally be called live action.”

The magic ingredient in all of this is the virtual reality headset. Director Jon Favreau, who had already experimented with creating photorealistic environments on 2016’s The Jungle Book, was able to create a “virtual set” for production on The Lion King, allowing a computer-animated film to be directed using many of the same techniques as a live-action one. Favreau, alongside his crew and cinematographer Caleb Deschanel, could pop on their headsets and suddenly be transported to a digital rendition of Pride Rock, the setting of the famous “Circle of Life” opening sequence, as well as the home of King Mufasa and his fellow lions.

Once digitally transported there, the filmmakers could search for the perfect shot or even fine tune the landscape itself (is there a pesky boulder in the way? Just move it a few metres to the left!). The filmmakers then navigated the environment with an avatar, as if they were playing a video game. They could then film scenes, in real time, using simplified versions of the animated characters. But, most importantly, this was all done with the help of physical, 3D printed camera equipment. Tracks and cranes were laid out in a large, open room and fitted with infrared signals. Deschanel could then control the equipment just as he would on a live-action set, as the movements were instantly translated into those of the virtual cameras capturing the scenes on the virtual set. Multiple takes from different angles were shot and then delivered to the film’s editors, Mark Livolsi and Adam Gerstel.

Favreau even loosened up the process of recording the actor’s performances. Unlike when doing traditional voiceover work, the cast were given able to freely move around a soundproof room and truly immerse themselves in their scenes, with their facial expressions being picked up by long-lens video cameras. Much of Billy Eichner and Seth’s Rogen’s dialogue as Timon and Pumbaa was improvised.

“What we’re trying to do is, just like motion capture tries to get anomalies of performance, what we’re trying to get is anomalies of photography,” Favreau told SlashFilm. "All those little subtleties – it’s not anything I think anyone would notice consciously, but between the quality of the rendering and the techniques we’re using, it starts to feel like you’re watching something that’s not a visual effects production, but something where you’re just looking into a world that’s very realistic and emotionally feels as realistic as if you’re watching live creatures."

In an odd way, it’s all about avoiding perfection. Having the ability to guide a camera with your own hands, instead of having to input commands on a computer, allows for all the small nuances that human error and improvisation can bring. As any filmmaker will tell you, it’s sometimes the happy accidents that can deliver the best shots.

This isn’t the direction most were expecting Hollywood’s virtual reality future to head in. It’s the audience, not the filmmakers, who were meant to start strapping on headsets. In fact, it could be a long time before we’re experiencing the latest Marvel film by getting to run right alongside our favourite superheroes, since the medium still seems to be deep in its experimental stage. It’s not that the technology isn’t necessarily there, but that creators are still trying to figure out what exactly audiences want from the experience. Do they want to be the star of their very own action movie? That’s what’s offered by Robert Rodriguez’s 2018 movie The Limit, a 20-minute live-action short that sees you go sky-diving with Michelle Rodriguez and trade punches with Norman Reedus. Or is it more about stepping into someone else’s shoes? A string of socially-conscious VR shorts have played on ideas of extreme empathy: Alejandro González Iñárritu’s Carne y Arena puts you in the shoes of an immigrant making the journey across the US border, while the Rainforest Alliance-backed Tree lets you see the world through the eyes of, yes, a literal tree in the middle of the Peruvian rainforest. But it seems like no one can quite come to a consensus. Virtual reality, right now, is a powerful tool that’s yet to find its artistic drive.

Maybe that’s why it makes sense to combine it with more conventional forms of filmmaking – if you can call today’s CGI-laden blockbusters anything close to traditional. Although Favreau’s “virtual set” is definitely the most extensive and groundbreaking use of the technology, VR has already proven useful on a number of recent blockbusters. Steven Spielberg, for example, had a “virtual set” created for Ready Player One, using an HTC Vive so that he could scout locations and plan shots. The actors could then immerse themselves in the environments they were supposed to be reacting to.

During the production of Solo: A Star Wars Story, VR was used to nail the film’s trickiest set piece: the train heist, where Han and Chewie are hired to help steal coaxium, otherwise known as hyperfuel, off an Imperial transport. James Clyne, the film’s VFX art director, put on a headset and entered a life-size virtual model of the train, all in order to test whether a character could actually make the jump between carriages. “I just put my back against the one wall and I ran,” Clyne told StarWars.com. Nevermind the fact that he was in a cramped office and nearly slammed into the other wall. He added: “I was able to do it! And I went back and reported back to production, the directors – I, normal Joe, can jump over that!”

And there’s little doubt that James Cameron, currently in the middle of production on his slate of Avatar sequels, will be helping to push the technology even further than before. After all, it was the first Avatar, released in 2009, that helped set the precedent for Favreau’s approach. Cameron made use of something called a virtual camera system, which allowed the actors in their motion-capture suits to be instantly synchronised with their virtual counterparts, already placed into their digital surroundings. For example, Zoe Saldana would act out a scene, while Cameron could watch a monitor and see her character Neytiri in the middle of Pandora, performing the same scene in real time.

As much as the introduction of virtual reality into the filmmaking process can feel like it’s all just unnecessary techno-razzle dazzle, it’s actually been helping filmmakers ground themselves in a world where, every way they turn, it’s just another endless wall of green screen. VR has always been about the sensation of complete immersion, which is exactly how we want the people making our summer blockbusters to approach their work: actors can actually see and understand the world they’re helping to create, while directors and cinematographers have a space where they can explore and try new things. It might even be the solution to the fact so many action sequences play out like a giant, confusing blur, since filmmakers can actually walk through the entire scene and figure out what works and what doesn’t. Really, the only limit is their own imagination. Granted, as an audience, we might not notice that much of a change, but virtual reality still has the potential to completely revolutionise how films are made. Plus, it all sounds like a lot of fun.

Want more Lion King content? Check out our ranking of every live-action Disney movie so far.