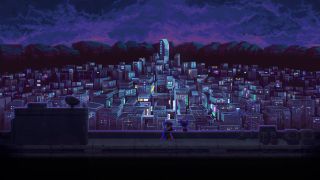 On the surface a side-scrolling 2D shooter along the lines of Not a Hero, with the violence of Hotline Miami sounds incredible, right? In reality, Katana Zero is much, much better than that, because it's ability to make you feel like a badass over and over again is incredible. And it does so in a much more succinct and successful way than something like Sekiro ever could.

Of course, that's not to say that Sekiro doesn't make you feel like a badass. It's a game that asks you to dedicate many hours of your life to defeating one boss, all in an effort to unsheath the kind of satisfaction and elation that you just don't get from many games full stop. But imagine if you could distil that energy into a five minute or so rotation, soundtracked by an electronica synth jam soundtrack, and you've got Katana Zero.

This brand new game from publisher Devolver Digital and developer Askiisoft sees you playing as a contract killer samurai, one who happens to be dosed up on a special drug called Chronos that allows him to manipulate time. He also can't remember his past, so is seeing a shrink who's in on the whole thing – you'll find him asking you about your dreams, the people you interact with, and about your various contracts. It makes for an incredibly compelling, and surprisingly spoiler-filled story that is best played with as little knowledge as possible. Audible gasps emitted from me as I played, constantly surprised by just how immersive the story is for this little 2D shooter.

It helps that it offers a plethora of dialogue options, including the ability to cut off an NPC's chat if you just really want to make them shut up, or force their hand in terms of information. It makes you feel much more in control of the narrative and reminds you that there's always a choice in Katana Zero.

A glint of silver

And that plays into the gameplay too. At its core, Katana Zero is a game with zero health bars and technically zero second chances. However, because our lovely little samurai can rewind time, the moment you're struck by an enemy you are thrust back to the start of the level to try it all over again – this is accompanied by a lovely visual animation that's like physically rewinding a VHS tape. You'll have to use your katana, and a plethora of throwable weapons like Molotov cocktails, meat cleavers, and stone busts to avoid getting hit, and learn that a well-timed roll or slash of your blade can deflect bullets. Thankfully, you also have the ability to slow down time to make sure that a well-timed move is as well-timed as possible – anything less and you are being whipped back to the start. Avoiding laser beams, blending into crowds, avoiding security cams, and unlocking doors are all obstacles that you'll need to figure out how to navigate, you know, amidst all the decapitating and the maiming.

There's so much to think about that getting through a level can feel like an achievement in itself, but then, continuing the VHS theme, the entire level will replay as a kind of black-and-white take on your colourful – and bloody – antics emphasising just how awesome your execution was as you massacred your way through each level. It's that sense of mastery – and sometimes relief – as you complete each level that feeds back that gratification loop, and far more regularly than you're going to get with something like Sekiro.

Plus, just like Sekiro, that sense of achievement also extends to boss fights, as taking them down hinges on your ability to recognise their patterns as much as it does your skill. I won't spoil what or, more importantly, who they are here as they're so heavily tied to the game's twisting-and-turning storyline, but know that they're not easy, and still adhere to the one-hit-kill mechanic. And yes, that means if you die several levels into their movement patterns, you're going straight back to the beginning of the fight.

As someone who gave up on Sekiro due to a lack of patience, not to mention that feeling of it being near-impossible that I just couldn't shake. But with Katana Zero, persistence, creativity and a little bit of good old logic means that it can be mastered fairly quickly – and you can always see where you've gone wrong if you're facing rewind after rewind. Katana Zero is brilliant at giving you enough tools to master each level too, meaning it can sometimes feel more like a puzzler than a 2D shooter at times. Each failure can be chalked up to bad timing, not utilising your time manipulation enough, or simply coming at a level from a slightly different tactical standpoint. In the end, it's just about learning each level, how the enemies move, where the inevitable surprises come from and, eventually, making your way through from start to finish with no survivors. So, oh boy, when that replay comes does it feel good. And stylish too.

Katana Zero is always strongly channelling a neo-noir vibe and is beautiful in a neon-pixels-covered-in-blood kind of way. Levels are fantastically crafted, and always visually varied – my personal favourite is still the one where you work through a club, hiding from guards in clusters of dancers by strutting your stuff. The interactive cutscenes are brilliantly animated, all in the game's unique pixel art style, and the time-bending story is weaved excellently all throughout the entirety of the game. It really is quite the little thriller.

This is a nifty little title that works so well on Switch (it's also available on PC, PS4, and Xbox One too by the way), will keep you guessing in terms of storyline, and always on your toes in terms of combat. I can't get enough of it.

Looking for something else to play on Switch? Why not check out our list of the best Switch games that are currently available.