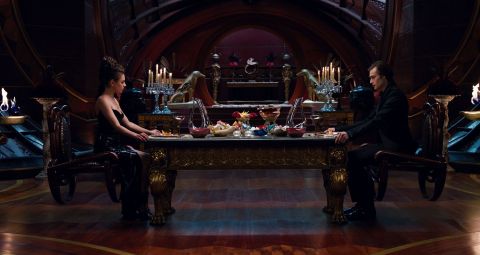 How will the Wachowskis be remembered when the time comes for them to hang up their megaphones? Some 16 years after Neo’s first groundbreaking adventure in cyberspace, “the makers of The Matrix” is still the main way they’re described. Yet that ignores the fact that in the decade and a half since, their output – while often flawed – has never been less than interesting. From the overblown Matrix sequels to the sugar rush of Speed Racer and the mind-bending Cloud Atlas, Lana and Andy have so frequently pushed the envelope of what it’s possible to put on screen that they deserve the benefit of the doubt when it comes to the occasional storytelling misstep. Nobody makes movies quite like they do.

Jupiter Ascending is everything you’d expect from the siblings’ first trip into orbit, a fun, inventive, visually stunning piece of space opera. Given free rein and a mega-budget to play among the stars, the duo have plundered ideas from a diverse range of sources (both screen and page), and mixed them all up to make something that feels unlike anything we’ve seen before. The sheer density of things happening in each frame boggles the mind.

Both visually and in the action stakes, Jupiter Ascending could give pretty much any space movie a run for its money. One vertigo-inducing scene just above Chicago, where Channing Tatum’s alien soldier Caine Wise protects Mila Kunis’ Jupiter as he evades alien attackers while flying among the skyscrapers on rocket boots, is truly exhilarating, and feels so real you can almost feel the wind in your hair.

But go in expecting Guardians Of The Galaxy and you’ll be disappointed. Yes, it has a human whisked away from Earth at its centre (in this case, Mila Kunis’ eponymous toilet cleaner). Yes, it has a megalomaniac villain who cares not a jot for the little people (quelle surprise). And obviously the A-grade special effects are a given. But that’s where the similarities end.

Where Guardians pulls off that tricky balancing act between having its tongue in its cheek and being credible science fiction, Jupiter opts for a different route, taking itself entirely seriously. It gets away with it too, because even at its most camp and outrageous – and it’s often undeniably both – you always feel that everyone involved believes 100 percent in what they’re doing. Yes, you even buy that Sean Bean is a soldier whose genes are spliced with a bee’s. Perversely, it’s when Jupiter actually tries to be funny – in a couple of botched one-liners and the rather broad portrayal of Jupiter’s Russian family – that it feels least assured.

As in The Matrix, it’s the villains who stay in the memory. Eddie Redmayne, currently grabbing headlines for The Theory Of Everything, is brilliant in an entirely different way as Balem Abrasax. The scheming elder sibling of an uber-rich and powerful family, he’s trying to claim the Earth for himself in a performance of unashamed pantomime villainy that comes with just enough menace to keep him threatening. His interactions with similarly Machiavellian siblings Kalique (Tuppence Middleton) and Titus (Douglas Booth) play out like Dallas In Space, with whole planets taking the place of oil fields.

Luckily, the political machinations here are more exciting than those in The Phantom Menace. Though you do have to keep your wits about you to keep track of who’s doing what to whom and why. If you find yourself getting lost among the double, triple and quadruple crosses, just remind yourself that if they’ve got a posh English accent, there’s a decent chance they’re up to no good.

Alas, the heroes fare less well. Tatum is blandly efficient as Caine Wise, the half-wolf soldier dispatched to track down Jupiter, but the always-watchable Kunis is saddled with a thankless role. The reincarnation of intergalactic royalty, Jupiter’s thrown into the whole planet-hopping mess by fate, and doesn’t become any more proactive as the movie goes on.

Describing her as a heroine would be inaccurate, seeing as she’s really just a damsel in distress whose genes have been spliced with a McGuffin, a throwback of a character who needs rescuing nearly as often as Lois Lane. Her portrayal is both a misstep and a bizarre storytelling decision, seeing as her Chosen One arc bears so many similarities to Neo’s in The Matrix – hell, the whole movie follows a similar blueprint, from its structure to themes about humans as a commodity – yet she’s denied the chance to explore the potential of evolving into something new.

Ultimately how much you will enjoy Jupiter Ascending depends on how you feel about the Wachowskis. If you reckon their careers as filmmakers-to-watch ended with The Matrix, you’ll find little to win you back here. If, however, you still get switched on by their unique brand of filmmaking, this will be right up your street.