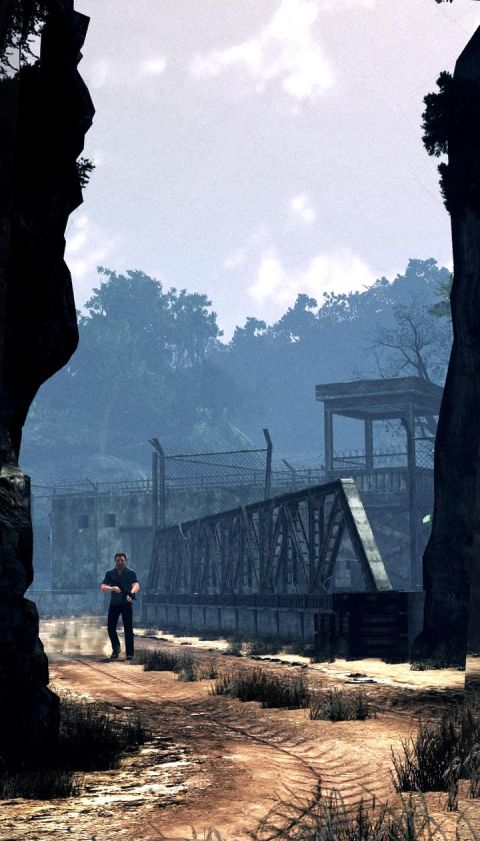 In the first mission of Blood Stone you skydive onto a yacht, shoot a dozen or so enemies in their stupid little heads, and jump into a million-dollar boat for a high-speed chase. Not exactly what you%26rsquo;d call formulaic.

That is, until the second mission, when you fly onto a dock, shoot several dozen henchmen in their stupid little heads, and jump into a million-dollar car for a high-speed chase. Nice.

Each of the missions in the rather short campaign follows suit, sometimes spritzing a fancy %26ldquo;get chased by something big%26rdquo; sequence or an %26ldquo;escape a building full of lethal gas%26rdquo; segment. Most of the time it actually feels like a blockbuster, with a quick-pace and plenty of changes in scenery.

Blockbuster or not, the plot is boring as hell, which means almost as boring as Quantum of Solace. It has something to do with diamonds and gasses, like Ke$ha after Taco Bell. Controls don%26rsquo;t always match the excitement either %26ndash; an early scene has you tappinga singlekeyto dispose of a helicopter in a high-speed chase %26ndash; not mashingaway feverishly trying to fire a bullet into its whirring blades from the choppy water %26ndash; just tapping it once. Takedowns, which function as the game%26rsquo;s melee combat, are achieved by simplyhitting a keyto display a fancy animation of Bond doing all sorts of cool things while you observe.

Each takedown gains Bond a focus shot, which funnels all of CraigBond%26rsquo;s super agent powers into a direct headshot. Bond baddies have always been a little stupid, but there%26rsquo;s really no denying that Blood Stone%26rsquo;s enemies are strangely idiotic. They hide behind large explosive crates, toss grenades against walls, and interrupt gunfights to saunter over to whichever corner you hide behind (allowing for a takedown and focus shot). Even so, the game%26rsquo;s rather difficult on Agent and 007 modes.

Part of what makes Blood Stone difficult is that Daniel Craig isn%26rsquo;t the typical bullet-sponge protagonist. Sure, he can still take more bullets than 50 Cent and Wolverine combined, but a few good ones and it%26rsquo;s curtains. Which is why the way Bond opens doors is absolutely terrifying %26ndash; just swings %26lsquo;em open and stands there as exposed as an exhibitionist on laundry day.

There were a few instances where grenadiers would spawn in the worst possible locations and make short work of our slightly tousled hair and D%26amp;G loafers, but for the most part the checkpoint system is well shaped. You%26rsquo;ll die lots without the help of typical Bond vitality and gadgetry though. In fact, Bond%26rsquo;s only gadget in the game is his %26ldquo;smartphone%26rdquo; which can do pretty much everything, from setting off car alarms and unlocking doors to retaining perfect service in the middle of a mineshaft.

Unfortunately, there%26rsquo;s just not enough here to keep you coming back. Once you%26rsquo;ve finished the campaign once, you can play through online modes or take a shot at an even more difficult campaign, but more than likely you%26rsquo;ll follow the Bond-film route and call it quits.