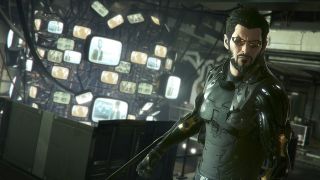 The first audio log ever recorded was in the office of telephone inventor Alexander Graham Bell, who famously said, “Mr Watson, I overheard those clowns in management talking about Project Omega again. I can’t believe it’s still going ahead after what happened to Jameson in Operations. Last I heard they’re still raking guts off the ceiling. PS: I’ve changed the passcode to the weapon locker to 2844.”

Who could have known that this primitive form of leaving ominous messages and passcodes for weapon lockers would have such a profound effect on video game history? Today the average game contains anywhere up to one thousand hours of inane dialogue, recorded on to dozens of discarded PDAs, vinyl records, hovering orbs and cassette tapes. From Metal Gear Solid and BioShock to Dishonored and Titanfall, you can’t move two feet without some half-remembered secondary character waffling in your ear about their shonky childhood problems. But why?

There is an old maxim in fiction writing that goes “show, don’t tell”. Essentially it means that if a character is feeling sad they should place their forehead against a rainy window and sigh deeply, rather than look down the barrel of the lens and say, “Hello, I am a big sad idiot”. Audio logs snub this rule abhorrently: glib antagonists spill their backstories in revealing diary entries, professors express doubts over genetically engineering a race of mutant super soldiers, and space-station maintenance staff bemoan the cultists hanging about.

Call Of Duty: Infinite Warfare stretches this concept to breaking point. On your captain’s computer you’ll find audio files sent from the autocratic leader of the space terrorists, which suggests that the bad guy is in direct contact with you. And Doom expects you to believe there is a “You can’t move two feet without someone waffling in your ear” universe in which people actually use the voice memo function on their phones, but also regularly drop these phones into yawning hell chasms. Nope, I don’t buy it.

Like most problems in games, audio logs have come about not because writers are lazy (though they often are), but because they are cheap. Good exposition is hard and expensive to animate, while locking a voice actor in a booth to record a two-hour monologue costs relatively little. (Famously naive people, voice actors will often work overtime in exchange for small handfuls of food, or scraps of paper with the words “actual money” written on them.)

Canny developers have incentivised audio logs by occasionally including four-digit passcodes that unlock a rocket launcher in the adjacent room. But when you have to compensate players for paying attention to your game’s backstory, surely something has gone terribly wrong.

Some games explore other means of adding colour and depth to their universe. Jensen’s apartment in the latter Deus Ex games is a masterclass in environmental storytelling, for example, using discarded cigarette packs and fancy toilets to demonstrate that Jensen is a complex man who smokes and poops. In a lesser game you’d have to listen to the protagonist saying, “I smoke and poop, that’s just the kind of complex guy I am.”

Beyond this kind of environmental storytelling, there’s not a lot developers can do to shoehorn in world detail. I mean, they could give all the audio logs tiny legs so they could run around and cower behind bookshelves, turning the mundane act of fishing a piece of exposition out of a bin into a fun game of hide-and-seek. Or the rich history of the game world could be known only to the hundreds of mice that occupy it.

Or perhaps, at the beginning of the game, the biographies of all the main characters would scroll by. Or maybe, every night when your character goes to sleep, he could dream an entire episode of Newsnight that stuck into the gritty political detail of whatever futuristic dystopia you’ve found yourself in. Literally anything is better than being subjected to another audio log ever again.