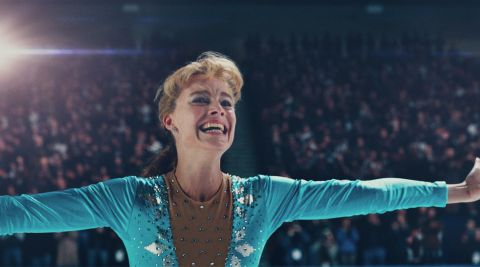 Like Tonya on the ice, this vicious black comedy is lean, mean and hard to take your eyes off.

Chances are that if you’ve heard of Tonya Harding – the disgraced US figure-skating champ allegedly connected to an attack on her rival, Nancy Kerrigan – you’ve already formed an opinion of her. And, if you haven’t, you won’t see this movie. Both notions are worth reconsidering.

As Tonya’s mother, Allison Janney is on fearsome form, exhaling vicious put-downs like cigarette smoke. When young Tonya complains about the other girls calling her a redneck, her mum’s advice is simple: “Spit in their milk.” Margot Robbie, meanwhile, is excellent as Harding, both defiantly unloveable and vulnerable. When she pleads, “I’m a real person,” you don’t doubt her.

I, Tonya is a far cry from the folksy sensitivity of director Craig Gillespie’s earlier Lars and the Real Girl (2007), while the witty screenplay by Steven Rogers (P.S. I Love You) offers a scattergun character assassination that obliterates all comers. As Tonya rises through the sporting ranks, we watch her endure horrendous abuse from her mother. The most shocking moment comes from the juxtaposition of her line, “He was the first boy I ever loved,” with Gilooly smashing her face into a mirror. “What?” she demands, practically to a record-scratch sound effect. “Nancy gets hit one time and the whole world shits!”

It’s only when we get on the ice that the ugliness relents. Thanks to Nicolas Karakatsanis’ stunning cinematography, Robbie’s grace and some seamless stunt work, the scenes of Harding skating take your breath away for all the right reasons, recalling Black Swan’s virtuoso ballet sequences.

Which is not to say the film always lands its leaps. At a visceral level, I, Tonya is indecently entertaining, like a feature-length Happy Gilmore montage soaked in piss and vinegar. But on an intellectual one, it’s more than a little troubling. Jordan Belfort received similar treatment in The Wolf of Wall Street, but he was the instigator rather than the victim.

Here, most of the dramatic flashpoints come from women being hit; though the scenes aren’t framed in a gleeful fashion – on the contrary, they’re deeply uncomfortable – the tonal clash between dark laughs and domestic violence is one the film doesn’t properly address. Superbly acted, expertly made and completely unrepentant, maybe it’s too much fun to be “totally true”. Or should that be the other way round?

I, Tonya review: "This vicious black comedy is lean, mean and hard to take your eyes off"

Like Tonya on the ice, this vicious black comedy is lean, mean and hard to take your eyes off.