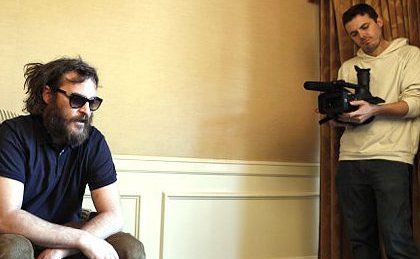 I'm Still Here review - When a bearded and bedraggled Joaquin Phoenix appeared on David Letterman’s show last year, many thought he was on a fast track to oblivion.

But as his brother-in-law Casey Affleck’s often hilarious documentary reminds us, he’s still here. As what, though?

Beginning in September 2008, Affleck charts six particularly turbulent months in Phoenix’s life as he announces that he’s sick of the biz of show. “I don’t want to play the character of Joaquin anymore,” he says.

Instead, he wants to launch a rap career (even telling a bewildered Mos Def that one of his cuts is like a “hip hop Bohemian Rhapsody”).

Problem is, JP is more Vanilla Ice than Eminem. As he tries to peddle his mediocre music, seeking out Sean ‘P. Diddy’ Combs as a producer, he begins to unravel. Gaining weight and growing the Grizzly Adams beard, he becomes increasingly selfish and arrogant, his new career going nowhere.

Already-notorious scenes see him snort drugs and party with two naked prostitutes in his NY apartment, get into a fight with a heckler during a rap gig and hack off his British assistant Antony so much, the guy takes a dump on his face while he’s asleep.

Depending whether Affleck and Phoenix keep schtum over this, I’m Still Here will be debated for years to come. Is it genuine? Is this really Phoenix in meltdown mode? Or is he attempting to out-do Sacha Baron Cohen’s level of immersion in Borat and Bruno and play the ultimate A-list asshole?

If it’s the latter, then it may just be the greatest performance of Phoenix’s life. Whatever the truth, Affleck’s film makes for a sharp critique of celebrity culture, as vicious vloggers lead a tirade of abuse against Phoenix, only serving to increase his angst.

“I’m just going to be a joke forever,” he rages, after the Letterman debacle. Perhaps. But then maybe the joke’s on us.