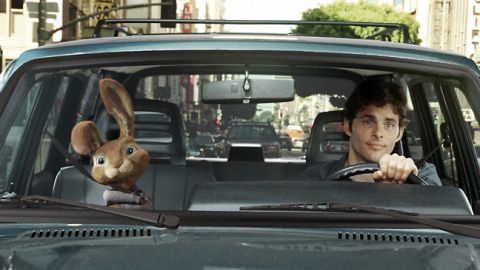 Who gives a toss about Easter apart from the Archbishop of Canterbury? Oh yeah, millions of chocolate-crazed kids.

Spotting a lucrative gap in the holiday-movie market, this engaging if predictable comedy pins a dads-versus-sons tale on the Easter Bunny, as rebellious teen rabbit E.B. (Russell Brand) ditches Easter Island and his destiny for a dream of drumming in Hollywood.

Director Tim Hill employs his Alvin And The Chipmunks patented recipe of live action mixed with a showbiz-hungry CG critter once more.

Here we have unemployed house-sitter Fred (a mugging James Marsden), who zings from threatening his furry new friend to helping him audition for reality TV’s Hoff’s Got Talent. A talent, incidentally, for Adam West-style self-parody, as the strangely stiff-visaged Hoffmeister offers up a campy cameo.

But whose idea was it to cast the visibly 37-year-old Marsden as a dad-disappointing slacker, a role crying out for Ashton Kutcher-style goofing? Having two heroes, one way more cuddly, also leaves Marsden flailing round the film’s flaccid action scenes like a spare chick in an Easter parade.

What knocks the movie up several notches is sterling voicework, with Brand making E.B. both playful and charming. Brand’s chirpy backchat gives a sly, unexpected edge to what would otherwise be glossy, garden-variety chaos, as does Hank Azaria’s hilariously jealous chick Carlos, threatening Easter Bunny HQ with a chicken-coup.

It’s hard to hate a film whose hero craps candy – that knowing, mildly naughty tone proves eggsactly the right antidote to all the frantic, family-friendly fun.