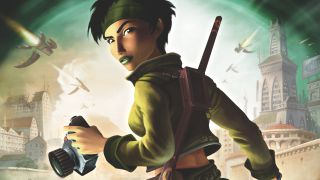 Like almost any game elevated from greatness to cultish reverence, Beyond Good & Evil was a commercial flop. Critics loved it, but gamers, sadly, just weren’t buying it. Years later, however, and with a sequel on the way, people are still talking about it.

And what a game it is. A good 14 years on, and one HD re-release later, BGAE is still as great as the day it went gold from a small team at Ubisoft Montpellier. The years aren’t often kind to the games we once loved and idolised, but Ancel’s greatest work to date (which is high praise indeed considering he’s also given us the first two Rayman games and Rayman Origins) laughs in the face of time and its endless butchery of nostalgia. While its genre-melding ideas are so full of heart you’ll scarcely notice how hare-brained it really is.

Set on the distant planet of Hillys in the year 2435, you’d think Ancel would have drawn on his experience with platformers to create something akin to Insomniac’s Ratchet & Clank. This is a great platformer, but it’s so much more than that. It’s a rich and vibrant tapestry of genres, blended together with a dash of French creativity. It’s part melee brawler; part racing game; part photography masterclass; part stealth actioner and all science-fiction melodrama.

Right from its opening scene, BGAE pulls you in and holds you. In the boots of a ballsy yet endearing photojournalist named Jade – and her unforgettable pigman companion, Pey’j – you’re not forced into a lifeless trudge through ubiquitous sci-fi tropes, but a human drama where a group of multicultural beings are fighting for their livelihoods. There’s certainly a grander saga there to be uncovered – it was originally conceived as the first part of an expansive trilogy – but here we’re treated to a conspiracy thriller set on the other side of the universe. A place where the media is oppressed, and innocent people are abducted and forced into slavery.

Unsurprisingly, for a game that takes its name from a book by existential philosopher Friedrich Nietzsche, this juggles plenty of deep and powerful themes. We delve into a story involving human trafficking on a global scale, where governments collude with unscrupulous zealots while the common man is forced to survive in the wake of it all. Far removed from the cutesy safety of Rayman, it offers an insight into the times in which it was conceived – a post 9/11 landscape where fear ran rampant through the Western world. Sure, the ending and ‘hidden power’ that Jade is revealed to possess (no spoilers) does take a tiny bit of shine off what could be a stellar story, but the world you get to explore on the way holds its integrity to the end.

Its world and inhabitants are still memorable – and none more so than trendsetting heroine, Jade. Confident, inquisitive and compassionate, Jade’s rather handy martial arts skills certainly help when forced into a scrap, but it’s her everywoman qualities that have secured her place among gaming’s great protagonists. She’s not oversexualised, or presented as some fantastical approximation of her gender. Instead she’s a working class girl who runs towards danger, protecting the children at the orphanage she calls home, as her grumpy yet protective ‘uncle’ Pey’j grows frustrated at her inherent sense of civic duty.

She’s might be a dab hand at fighting but it's the way she uses another skill that really proves there’s more to her than beating up alien monsters. Through her photography, and the ability to take our own pictures, we become intimately acquainted with Hillys’ diverse ecosystem and community. We get exposition and world building but, at the same time, every successful animal snapped can also be traded for credits. For a character living in a community that’s struggling to make ends meet under the weight of a corrupt government, Jade can power generators for her family and buy upgrades for herself off the back of a creative talent rather than simply looting corpses.

Even the music that accompanies Jade’s crusade for truth pulses with originality. To help bring his unique vision to life, Ancel turned to eclectic French composer Christophe Héral, who had previously made his name working on French films and animated features. This is a multicultural affair after all, filled with wildly different people and places, so Héral took that mantra to heart, infusing every facet of the game’s soundtrack with musical style and voices from world music. From the Caribbean warmth of Mammago Garage to the funk metal of the hovercraft races.

Take the music that plays in the background of a Mos Eisley-esque drinking hole, the Akuda Bar. The main song you hear within its walls, ‘Propaganda’, was written to lyrics in Bulgarian rather than French or English, invoking a palpable Cold War feel that tapped perfectly into the oppressive feel of a shadowy enemy. With haunting Arabic strings and warm Indian percussion, it seamlessly encapsulates the cultural melting pot bubbling away.

Even the dialogue for the game had the veteran composer pulling out all the stops for his first foray into video games. For the menacing DomZ - the alien threat in Beyond Good & Evil - Héral fashioned an entirely new language of guttural, rolling ‘r’s, and took the time to record all the voices of Hillys’ background inhabitants himself. There’s a wonderful DIY quality to every sound and snippet of audio you come across as you explore the Venetian waterways of Hillys, a sense of unbridled creativity that no doubt made the game so hard to market.

Even now it’s really difficult to accurately pigeonhole Pey’j and Jade’s adventure without reciting a long list of genres and subgenres. The platforming mechanics that Ancel worked so hard to perfect offer a solid base, but the hand-to-hand focused combat smacks of your classic melee brawler. Stealth sections (with insta-fail rules, naturally) nodded furiously in the direction of Metal Gear, while those hovercraft racing and chase sections were part vehicular platformer, part karting mayhem.

Despite having so many moving parts, Beyond Good & Evil flits between them effortlessly: one moment you’re solving environmental puzzles, the next you’re  sneaking around DomZ and other foes. Each mechanic used just enough to bring something different to the mix before being dropped for another round of cross-genre pollination. It’s a game of many parts to say the least, but one that’s still comfortable in its own virtual skin.

And that’s almost certainly while this had such a rocky road to release. Its original design brief went down so poorly with critics when it was unveiled at E3 2002, Ancel and his team were forced to head back to the drawing board. Originally, Ancel wanted to ship Beyond Good & Evil with an entire universe to explore on one disc, channelling an overreaching ambition usually attributed to  Peter Molyneux.

The final product was certainly reined in from the overreaching concept, but there’s still a wonderful sense of freedom. There’s no escaping the invisible hand of linearity that pokes you in the direction of the main story, but you’re still given the power to explore Hillys at your leisure. Ancel and his team spent so long building a rich ecosystem and cast of characters, why wouldn’t they want to let you wander its landscapes snapping pictures and striking up conversations with the locals?

With Beyond Good And Evil 2 finally happening (although now as a prequel, seemingly without Jade or any other recognisable characters), at least we know we’ll finally get to see the vast universe that was only hinted at in the first game. Could the mysterious character revealed at the end of the E3 2017 trailer actually be Jade’s mother? Will we finally learn more about her origins, and those of DomZ? Regardless of whether the sequel does indeed answer our questions, you know Ancel’s second instalment will be just as culturally diverse and rewardingly exotic as the first one was back in 2003.

Dom Reseigh-Lincoln
Dom has been playing games longer than he'd like to admit, but that hasn't stopped him amassing a small ego's worth of knowledge on all things Tekken, Yakuza and Assassin's Creed.
See comments