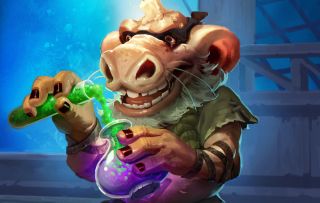 Hearthstone will dish out another batch of Galakrond nerfs in an update coming later this week, to say nothing of changes to other problematic cards like Necrium Apothecary and Ancharr. The update also contains a few deceptively small buffs to some Battlegrounds minions and heroes, with more Battlegrounds balance changes "coming very soon" according to Blizzard's post.

The Standard nerfs are the update's headlining act, so let's go through those first.

Most of these nerfs target the Galakrond packages for Warrior, Warlock, and Shaman, and Deathrattle Rogue is also getting a well-deserved pruning. The nerf to Ancharr should also keep Pirate Warrior in check without obliterating the card's usefulness. And while Dragonqueen Alexstrasza can no longer 'go infinite' by generating itself, it'll still be plenty strong. All in all, these changes ought to be more impactful than the meager batch of Shaman nerfs released in December.

Where Standard news is all about nerfs, Battlegrounds is getting a wave of buffs. Those are:

The changes to Shudderwork and Infinite Toki are huge and will undoubtedly improve their win rates, and Queen Wagtoggle and Patches the Pirate didn't make out half-bad either. This Soul Juggler change should prove more powerful overall, and despite being a footnote in the patch notes, the tweak to Selfless Hero may be the most impactful change here. That's a lot of power for a one-drop, that's for sure.

Hearthstone is also getting a Galakrond solo adventure sometime this month, with 35 new cards in tow.