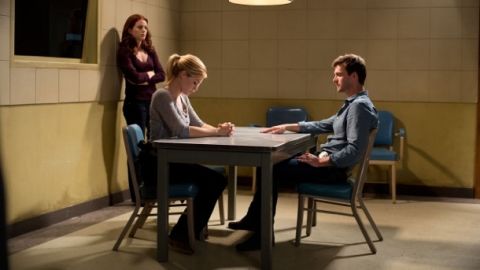 THE ONE WHERE Audrey discovers the identity of the skinwalker, and a man in a coma wakes up, but sends everybody else in Haven into a coma in his place.

VERDICT Let’s start by saying, “We hate to say we told you so, but we told you so.” Yeah, we’re feeling smug having predicted that Claire Callahan was the likely skinwalker. To be honest, it wasn’t much of a leap. After Tommy had been introduced this season just so that he could be killed off and replaced by the skinwalker, you had to start wondering what Callahan’s role in the series was really all about. Shame, in a way – both Tommy and Claire were fun characters to have around, above and beyond being mere plot devices.

Secondly – blimey. Five great episodes of Haven in a row now. This series has seriously upped its game,

“Last Goodbyes” has its creaky moments, and flashes of the old slapdash Haven of earlier seasons, but the good far outweighs the bad. We’re not convinced about the wisdom of the dual time-period story telling device, however. It simply confuses you at the beginning when Audrey tells everyone that they’re going down the police station to try to work out who’s the skinwalker… and then suddenly it’s the end of the day and Audrey is moaning that they haven’t found any answers.

It soon makes sense, when she wakes up the next day to discover that everyone in Haven is in a coma, and then we’re suddenly treated to a "Yesterday" caption and a flashback to the action at the police station. But even then, the two storylines don’t really gel. Nothing in the "today” storyline sparks off the flashbacks; they’re just randomly inserted. Events in one storyline don’t impact (to any significant degree) on the other. The structure doesn’t deliver any revelations more dramatically than telling the story in a linear fashion would have done. It just seems to be a way of preventing the episode from feeling like two unconnected, sequential blocks; the interrogations, then the coma mystery.

On the other hand, while the structure adds little to the episode, it doesn’t become irritating either. You just have to accept you’re watching two stories at once.

And both plotlines are great, which helps. The series of interrogations – as Audrey tries to trick the skinwalker into revealing itself by probing for gaps in her friends’ and colleagues’ memories – are cleverly scripted so they don’t become repetitive, and contain some really sweet and funny moments. Admittedly, no-one seems concerned that one of them must dead, which is a bit odd. Duke, especially, seems a bit flippant. But in general, the interrogations supply some lovely character moments and make good use of the charismatic Duke, Audrey and Nathan dynamic. But you can’t help thinking that even though Audrey has finally told Nathan that there are things she needs to tell him, she ain’t gonna get time to tell him before the end of this season, the way things are going. Sod, “We shouldn’t do this over the phone.” Get on with it!

Meanwhile, over in tomorrow, the freak-of-the-week plot is a little gem. A few reviews ago we were moaning about how dull some of the guest stars are on this show. That’s all changed recently, and if Nolan North is stunt casting (see below) then long live stunt casting is all we can say. Will Brady, the coma patient who wakes up and sends everyone else in Haven into a coma instead, is a great, lively, instantly likeable guest character, and is blessed with some of the funniest, Whedon-esque snark lines of the episode (Will: “Let me fill you in – naptime is not a superpower.” Audrey: “They're not superpowers, they're curses.” Will: “Oh, curses. Why didn't you open with curses? Curses make sense.”). We especially love the way he refers to Audrey as "officer sceptic”.

Even the potentially cheesy ending to the coma plot avoids mawkishness. When Brady decides to put himself back into a coma to lift the curse from the rest of the town, and then Audrey has to convince his relatives not to pull the plug on him, the episode could have descended into cringe-ville, but the unsentimental performances pull it off with the perfectly. It’s touching rather than nauseating.

The only real glitch is the moment when Audrey finds the bolt gun killer’s victim’s earring in Brady’s apartment and immediately assumes he’s the bolt gun killer. While it’s not totally illogical that he could be the bolt gun killer, Audrey seems totally and utterly convinced, which seems rather harsh. There are plenty of other possible explanations. Her reaction feels artificially engineered for the sake of bit of tension. Not that there is much tension; the viewer is never in any doubt this isn’t the bolt gun killer, because that wouldn’t be a very dramatic revelation.

Overall, though, a solid, highly entertaining episode. And the running gag about explaining everything as a gas leak… “again”, is hilarious.

HASHTAG SPOTTING This week’s #EscapeToHaven is co-opted as a bumper sticker, spotted during the big reveal shot of everyone in Haven having a nap.

KING CONNECTIONS Okay, Brady isn’t exactly an uncommon name, so this could be just coincidence, but Mary and Charles Brady were the two Sleepwalkers in Stephen King’s The Sleepwalkers , and Will Brady in this episode is kind of walking in his sleep.

BLOOPER There’s a terrible bit of editing early in the episode where Audrey is crouching over a body, then stands up straight, but is back to crouching in the next shot. Normally we wouldn’t point out minor mismatches like this, but it's so glaringly jarring it needs to be named and shamed!

IT’S WOSSISFACE! Or maybe, in this case, “Wossisvoice!” Despite numerous TV and film appearances, Nolan North is most famous for as the voice of Nathan Drake in the Uncharted series of video games… which also features Haven ’s Emily Rose as Elena Fisher. He has a massive – and we mean massive – list of videogame and animation voice parts on his CV, but going by his performance here, he deserves to be the lead in a TV show.

BEST LINE
Brady: “You have cop face. I sense a theory coming.”