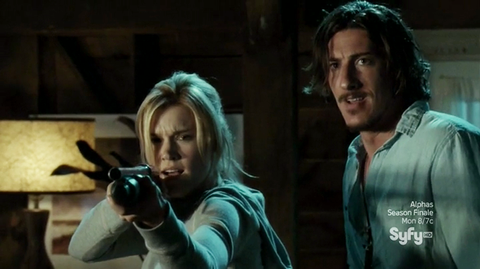 THE ONE WHERE A court clerk brings a painting of Lady Justice to life to dish out poetic justice to criminals she thinks have been let off too lightly.

VERDICT Okay, as the dentist said to 22-stone chocoholic, you know the drill by now. It’s Haven review time, so I wibble on about how the freak-of-the-week plot is silly beyond belief and how it’s the arc plot and the charisma of main three actors who keep the show from being unwatchable.

This time, though, things are ever-so-slightly different.

The freak of the week plot is, until the last few moments, actually really well done. Until the denouement, at least… when it becomes – oh yes – silly beyond belief.

It starts off well – and wonderfully creepily – with an attack on a perv who uses a hidden camera in a bag to shoot videos up women’s skirts. He’s found – still alive – minus his eyes, which have been scooped out with a spoon. At first Audrey and Nathan suspect the bolt gun killer (who has, after all, been slicing bits off his victims) but the lack of a bolt in the perv’s skull would seem to suggest otherwise (regular Sherlocks these two, aren’t they?). Then a woman accused of baby battering is found with her bones shattered and Duke, who has unpaid parking fines, watches a beautiful woman scratch his jeep with her knife then puncture the tyres. A few minutes after you’ve worked out there’s a “punishment that fits the crime” vibe going on, so do our heroes. But the question remains, who is this woman?

When she shows up again to exact justice on Duke for his unpaid alcohol duties, Audrey shoots her and she shatters into million pieces. So far so intriguing. Especially when Duke realises that if she ever learns that he murdered someone, he’s really up Shit Creek without a lawyer.

But the resolution…? Oh dear.

Turns out the Troubled court stenographer – tired of seeing criminals get off lightly – has brought to life the portrait of Lady Justice that hangs in the court room. The takes the episode into a quality nosedive for a number of reasons, aside from just how crap the painting is. (Look, we’re happy to bow to superior knowledge if any art connoisseurs out there want to defend this as some kind of undiscovered exquisite example of neo-naive native revivalism art or sommat, but honestly… it’s horrible, isn’t it?). For the fourth time in five episodes the Trouble is yet another variation on, “person wishes something into existence”. This is getting silly, frankly. What exactly is the clerk’s Trouble? If she hadn’t worked in a court room, how would it have manifested itself? Can she bring any painting to life? Or any thing ? It’s all so annoying vague and convoluted.

Then there’s the silly face-off between Duke and the clerk when he admits he murdered someone, thus luring Lady Justice into existence. Um, why? What did he hope to achieve? Luckily Audrey puts the case for the defence. To sum up: he’s a good man really. You can’t help thinking that this wouldn’t stand up in court, but it’s enough for the dippy clerk, who has a sudden, convenient crisis of conscience. She punishes herself to an eternity as a painted figure alongside Lady Justice in the portrait, in a special effects sequence that looks like all the toys going back to sleep in Bagpuss . Only nowhere near as good.

If, however, you can stomach such titanic cringe-fodder, there’s a great deal in the way of consolation.

Nathan’s subplot trying to infiltrate the Guards is taking some pleasantly unexpected twists and turns, not least that their existence and motivations might not be as straightforward as they seemed at first. And do we detect a romance brewing between Nathan and Jordan? Audrey-Nathan ’shippers may splutter in disgust, but it’s a plotline that feels like its developing in a logical, believable way.

The Colorado Kid plot takes a bit of a back seat, but it’s good to see some signs from Audrey at last that maybe she isn’t going to take her impending vanishing-from-the-face-of-the-Earth lying down. It’s only at the end of the epsidoe we hear about the bolt killer again. Apparently this time he’s killed someone and swiped their chin. Their chin ? That’s a bit random, but we suppose he needs the full set of facial features for his gruesome mix’n’match. What’s next on the chopping list? Eyebrows? Tongue? Forehead? Whatever the case, it certainly makes you want to keep watching.

New support characters Tommy and Dr Claire barely get more than cameos this week, yet both manage to make their mark with very little screen time (they get some of the best lines). Let’s hope that one of them, at least, hasn’t been introduced just to become cannon fodder down the line.

HASHTAG SPOTTING Bet some poor kid got blamed for this one…

PRONUNCIATION GUIDE Vince and David refer to Lady Justice as a Golem (a figure made from living clay in Jewish folklore) but for some bizarre reason pronounce it “Gollum”. There are a number of accepted pronunciations for Golem (Goh-lem, Gae-lem, Goy-lem) but it has never been named after a character in Lord Of The Rings .

I AM AN ACT-OR! Is this a plot device I see before me? Eric Balfour in Macbeth mode.

FREAKIEST MOMENT OF THE WEEK Bizarrely the site of a judge impaled by a giant set of scales doesn’t win this award, but rather that… erm… thing in the background that Nathan walks past at one point. What the smeg is it? Some alien life form? A homunculus Power Ranger? A Guy Fawkes dummy who’s got a bit lost? Or somebody with the strangest Trouble yet?

BEST LINE
Audrey: “I’m sorry. Can we try to set up another… um…”
Dr Callahan: “Session. Or, you know, appointment. One patient I had called them dates, but I had to drop him.”
Audrey: “Yeah, that was a good call.”