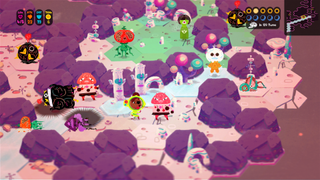 A charming rogue-like with streamlined combat and serious strategy

If you just heard the strictly technical description of the mechanics at play in Loot Rascals, you’d probably expect an obtuse, esoteric game that takes hours just to understand the basic concepts. Strategy. Turn-based. Rogue-like. Asynchronous player interactions. Fortunately, Loot Rascals is greater than the sum of its many genre classifications. It is a bizarro delight, a Serious Game that doesn’t take itself too seriously.

You’re a space traveler who has crash landed while trying to rescue your friend, a large yellow robot named Big Barry. To find him, you’ll need to fight your way through waves of enemies that, once defeated, might drop cards for you to loot. The cards increase your attack or defense stats, or the really fancy ones might offer special attacks or abilities, like teleportation, to increase your survival skills. Managing those looted cards is a big component of the game’s strategy. Many of them amp up their power depending on where they are placed in your hand. Since you’ve only got 10 slots to place cards, you have to make choices about which cards to keep and which to ditch.

All this sounds formal when written out, but the whole tone of the game is unabashedly kooky. Baddies range from a giant seahorse to a robot named Clunker. A basic defense card might be Space Shorts, while a technicolor crocodile called Pool Beast is a common attack card. And the unique one-offs just get weirder and weirder. The strategy game genre is one that frequently gets wrapped up in its own intellectual importance, so it’s a delight to find one like Loot Rascals that brings a distinctly British sense of oddness to the party.

Despite the potentially complicated systems, Loot Rascals also works well because the game simplifies in smart ways. It focuses on top-level strategy rather than getting bogged down in the minutiae. There’s no elaborate combat system to master; all you do is walk into the same hexagon as an enemy and the fight unfolds based on the stats you’ve acquired. Every five turns, the game switches between day and night. Some enemies attack first in the daytime and defend first at night, others reverse that. The strategic thinking is all about choosing when you fight the different baddies and when you spend a turn to loot a dropped card.

Finally, Loot Rascals has one of the sweetest player interaction systems I’ve seen. Players aren’t the only ones stealing cards; enemies around the world can nick them from you. When you defeat an elite enemy, you’ll see a card that was taken from another player. If you’re feeling generous, you can post it back to that person. If you’re more the mercenary type, you can keep it all for yourself. But keep in mind, returning the card means that the player’s hologram might appear in your game to lend a hand. Steal the player’s card and the hologram that appears will be much more murderous. These interactions add yet another layer of surprise and delight.

Lead creator Ricky Haggett’s last project was Hohokum, a game loaded with charm, a beautiful blend of art and music, and joyous energy. If Hohokum floated your boat, and if you like the idea of a teapot-headed robot guiding you through a strategy game, then Loot Rascals is definitely a game for you.