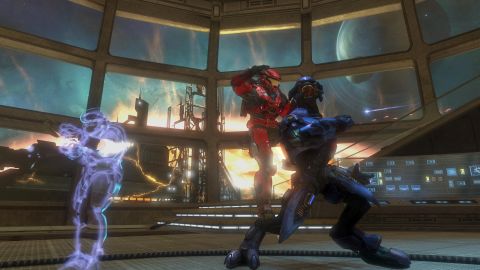 See, you aren't judging just one experience – this is the rare franchise in which campaign and multiplayer are equally popular, and must be considered with equal weight. You aren't judging for just one audience, either – the franchise is too popular for too many unique reasons. There are those who only want an epic solo saga, and those who only care about online competition. There are those who enjoy a Halo game once every couple years, and those who devour the entire Halo universe through comics, novelizations, anime and more.

And you know what? Each type of fan will have a very different reaction to Halo: Reach. Some will be thrilled. Some will be disappointed. To help you predict which end of the spectrum your opinion will fall, therefore, we're splitting this review into two parts. On this page, our review – and score – for the single player campaign. On the next page, our review – and score – for the multiplayer. On the third page – closure.

This is it. This is the beginning of a story, but more importantly, this is the end of an era. This is the last Halo game from Bungie. This is the developers' final contribution to a series that, over the past decade, made them legend.

As such, we were expecting a true epic. A true evolution. A go-for-broke, no-holds-barred, don't-look-back curtain call for the ages. Instead, we get…

Now hold on – that description isn't meant as an insult. We liked Halo 3: ODST. We enjoyed playing as protagonists with faces and personalities for once. We appreciated the more intimate scale, the more evocative mood and the more conclusive, comprehensible narrative. ODST was a refreshing change of pace from the familiar Master Chief formula. And as we'll describe later, that "2.0" is no joke, either. This is a much grander adventure than last year's semi-expansion pack.

Still, you can't escape the feeling that Reach is a sequel to ODST and not a prequel to Halo. Again, you take control of an elite insertion squad, tasked with entering a hopeless battle as everyone else is exiting. Again, the hero is a quiet rookie with zero characterization. Again, the teammates are defined entirely by their roles and accents: the American-sounding leader, the Russian-sounding heavy, the Asian-sounding sniper. Again, you meet a mysterious female scientist who provides you with controversial new orders. Again, the story has a single, fan-servicing connection to the previous Halo trilogy and, again, everything until that point is spinoff – exciting yet ultimately non-essential to the larger saga. Again, you will miss Master Chief.

What should have been

We could forgive this sense of deja vu if Halo: Reach didn't promise – within its very concept – such obvious, franchise-changing potential. Remember when you first heard that you would play as another Spartan? And, because the game took place before the training program was destroyed, that you would be assisted by a whole team of Spartans? Our imaginations soared, and we pictured a sci-fi shooter version of the Justice League or X-Men, a gallery of multi-talented superheroes kicking alien ass across the doomed planet until they were finally brought down by sheer numbers or overwhelming bosses. Or perhaps a campaign take on Team Fortress, with different Spartan skills being required at different moments.

Alas, no. You can still die easily at the glowing hands of a kamikaze Grunt, your toughest opponents are still Hunters or Wraiths and your armored, specialized friends – outside of cut scenes – don't offer that much more help than the Marines or ODSTs. In fact, the only time we saw any of them utilize the new Armor Abilities was when we accidentally drove a Warthog in their direction, forcing the automatically programmed use of an Armor Lock shield.

Flashes of the future

Like we hinted at earlier, however, Reach's campaign is better than ODST's. Not as much as we all had hoped, and not as good as the campaigns in the main Halo trilogy, but definitely an improvement over last year's installment. The story is a bit more meaningful. The characters are a tad more memorable. The scale is a lot more impressive. Most importantly, the levels are longer… you could finish ODST in 5-7 hours. Reach will last you the usual 8-10.

And every once in awhile – maybe three or four times during the entire campaign – Reach will surprise you. Show you something you haven't seen in a Halo game before. Show you what a real evolution to the series could be. Show you the possibility of a Halo 4. The highly anticipated Sabre battle – a brief yet beautiful starfighter battle through outer space, with dogfights and carrier defense worthy of Wing Commander – is one example. An almost open-world mission later in the game – in which you fly a Falcon across a neon-soaked city, taking out enemies in the sky, then repeatedly landing on different rooftops for intense, interior combat – is another.

Next page: Our review of Halo: Reach's multiplayer