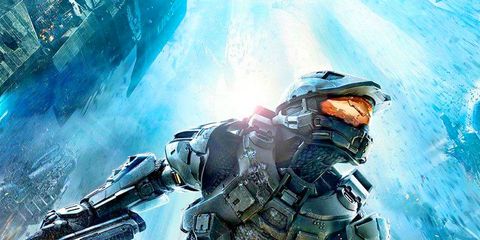 Halo isn’t allowed to die just because Bungie and Microsoft parted ways. It’s too big, too popular, and too vital to the Xbox brand to simply fade into obscurity. And so 343 Industries was assembled, and handed the keys to one of the most popular gaming franchises of all time. Its task was significant, and expectations were massive. With Halo 4, 343 has proven itself not only proficient in building a Halo game, but capable of building a better Halo franchise in a post-Bungie world.

Halo 4 paints a portrait of a much calmer universe in the years following Halo 3, letting John-117--better known to the world he saved as the Master Chief--spend his years of stasis in a half-destroyed spaceship undisturbed. Outside the Chief’s chamber, his AI companion Cortana acts as a watchdog, though not without a price: She is slowly slipping into a state called Rampancy, a fate akin to dementia that eventually befalls all AI. After four years of silence, she is forced to hesitantly wake John when the ship he’s on is scanned by a mysterious force. Before long, the Chief is involved in another galactic conflict, attempting to prevent an ancient Forerunner from unleashing his Promethean soldiers on an unsuspecting, peaceful Earth.

Watch our Halo 4 review to find out why it's the best Halo in years (yes, it's better than Reach)

Halo 4’s narrative is enthralling, and much better in structure than the series’ predecessors. The characters feel multidimensional and have strong personalities, running in stark contrast to past clichéd heroes and villains. More important is Master Chief, who has had a personality overhaul of sorts to make him more than a generic intergalactic hero. Cortana’s slow deterioration has forced a personality out of him, creating the Chief everyone imagined, but wasn’t really there--the interesting, complex, and (more importantly) broken man he was always said to be. The Spartan program tore him apart and put him back together, and though he didn’t let it show in the original games, this mental scarring is deep, and has grown into fruition in Halo 4, explaining the stoic character completely.

This story is held up on the shoulders of wonderful gameplay, and a campaign that keeps things varied by traveling between interesting locations to make for varied battles. Halo’s combat has always had a certain physicality to it that makes it feel more substantial and tangible. This is something which not only exists in Halo 4, but thrives. Seeing a vehicle in the distance means you can destroy or pilot it, and firefights often take place across sprawling mountain tops or in fields. Personal, intimate encounters with foes exist, but they’re spread between massive battlegrounds where the Chief is tasked with taking on dozens of enemies in vehicles.

These encounters are the bread and butter of Halo, and though other action-packed cinematic elements have been weaved throughout the story, there’s still plenty of classic action, and it’s as good as it has ever been.

Sadly, it’s also a bit shorter than it’s ever been, clocking in at around six hours on Normal and a good deal more as the difficulty is ramped up. Length wouldn’t be an issue if the pacing didn’t also feel a little rushed, as if the campaign was attempting to get the story with as quickly as possible. Chief will often step through glowing portals and land exactly where he needs to be, which, while partially explained and given context, still feels like a cop-out to expedite getting from point A to point B. When you step into a portal and land in the middle of a raging battle without anyone addressing the convenience of it all, you’ll start to feel like Halo 4 has some place to be, and it isn’t with you.

The basic gameplay of Halo didn’t need much work, but 343 upgraded features where it made sense. The addition of sprinting is helpful, but you’ll likely wish it was joined by iron sights, at least for some of the awesome new guns you’ll pick up. It's not that it's necessary--far from it--but with so many other elements shifting forward it feels out of place when zooming in on a pistol changes the entire screen. Other elements where it tried to evolve, such as canned assassination animations when you melee enemies from behind, fall flat, as it puts visual flare over gameplay, since you’re still vulnerable to gunfire while Chief throws an enemy down and stabs him.

The aforementioned changes definitely makes things feel more advanced, and help the multiplayer side of Halo--which has always been among the best when it comes to online shooters--catch up with the competition. Sprinting is joined by Ordinance Drops (similar to kill streak rewards), weapon and item loadouts, and deeper customization to allow you to create the Spartan that’s right for you. These definitely help modernize the Halo experience, even if they only have it falling in line with the modern era of shooters, instead of actually speeding past them. Multiplayer has also been given context, tying into the lore that the United Nations Space Command has partially revived the Spartan project in Master Chief’s absence. All multiplayer now falls after the “Infinity” moniker, a part of the game where squads of soldiers compete in wargames to up their skill, fighting in typical Halo multiplayer battles.

The area where Halo 4 truly revolutionizes is with Spartan Ops, a new cooperative story mode that’ll be rolled out weekly following release. Spartan Ops follows a squad of Spartans as they take on different operations around the galaxy. Built for co-op play, these free mini-missions are absolutely thrilling, providing classic Halo campaign battles in an episodic, easy-to-digest nature. The idea that five new missions will be available each week for ten weeks--adding around four or five hours of gameplay a month--nearly makes up for the abridged campaign, and we’re excited to see how it changes in the months following release, providing a glimpse into what may truly be the future of gaming. Or at least the future of post-release support for a game.

While 343 builds on the world, expands on characters, and adds to the lore of the Halo universe, its greatest focus in Halo 4 was investing in Master Chief--and a wise investment it was. By doing this, 343 Industries’ Halo 4 establishes itself not as “the next” Halo game, or “another sequel,” but instead opts to be a new beginning for the franchise--one with more commitment to its characters. It’s refreshing to see the series admit its shortcomings and catch up with its contemporaries without sacrificing what makes it unique, and that’s just what Halo 4 does, creating a name for itself without relying on its popularity, and getting us excited to start, continue, and one day finish the fight all over again.

This game was reviewed for the Xbox 360 at a review event.