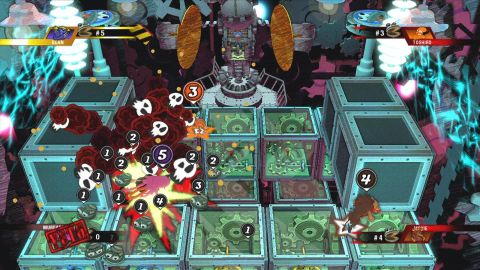 Did you ever order lobster bisque in a fancy restaurant and then have bubble gum-flavored ice cream with gummi bears on top for dessert? Of course not; it's a mismatch. Hail to the Chimp seems to be making the same attempt to merge two worlds, combining kiddie-style, action-packed minigames with a plot and setting that spoofs the electoral process in a way only adults have a chance of appreciating.

In an election to select the new king of the jungle, the various animals are all playing dirty. You'll sling mud at opponents (or their promotional signs), stuff ballot boxes, destroy voting machines, and so on. There are 16 events, though there's not nearly as much variety as we'd hoped. What does add flavor is the ability to team up with a competitor for a few moments at a time to create extra chaos. It's a great way to gang up on the leader, and opens the door for betrayal most foul.

Through it all, the comedy keeps flowing, often in the form of commercials or news reports. Just how funny these bits are is debatable here in the office, but we have the same arguments about Family Guy and Saturday Night Live. However, we can all agree that Hail to the Chimp is definitely a step above most games that bill themselves as "hilarious." And also that you have to be in your 20s to appreciate it.

There are some technical shortcomings; the animation can get choppy when there's too much going on (say, during a volcanic eruption) and it can be tough to keep track of where you are onscreen and which of your opponents you need to be punching in the face. But overall, it's passable. If you're looking for a 360 party game with something for the adults, this is definitely the candidate you should endorse. But we have to think that's a pretty big "if."