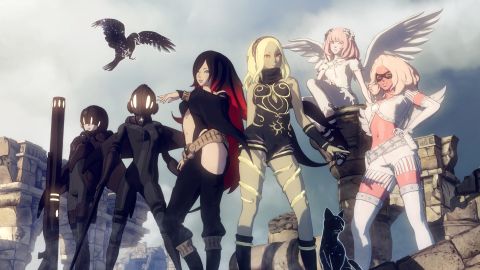 When Gravity Rush 2 sticks to its strengths, it soars; it’s a shame that its stale mission design and clumsy controls keep it from getting too high off the ground.

Like its manga-inspired superheroine Kat, Gravity Rush 2 is a bit oafish, clumsy, and often overthinks things way more than necessary. When Kat is flying through the air, fighting massive bosses in huge, open environments, or whipping through clusters of strange, floating rocks and just going for it, Gravity Rush 2 is an absolute delight - a convergence of strange narrative, jazzy style, and high-flying, vertigo-inducing acrobatics. When it forces you to the ground to complete yet another half-baked stealth sequence, it all falls apart.

First off, if you haven't played the first Gravity Rush game, whether on Vita or PS4, you should probably do that. Gravity Rush 2 is mostly coherent without prior knowledge, but its story will resonate with you a lot more if you already know the characters and events leading up to the sequel. Picking up shortly after the events of the first game, Gravity Rush 2 drops Kat off into parts unknown with little fanfare, leaving you to suss out exactly how she ended up in an alternate dimension and working for a mining outpost (unless you watch the two-part anime series on YouTube, which tells you exactly what happens). Here, she'll find that life is a lot like it was back at her hometown of Heskeville, only with a tropical color palette and a far wider disparity between the classes. The wealthiest live in palatial estates hovering in the clouds, the poor live in squalor in shacks below them, and a mysterious and reclusive Council presides over all. It's a delightful tale, one which, surprisingly enough, actually explores the awakening class consciousness of a small society and their desire to lead a democratic life unchained by the rich.

But it's only part of the story, though. While Kat is helping out her old and newfound friends in this strange land, she's also trying to find her way home and discover the truth about her own past. The way that Gravity Rush 2 ties all of these elements together is disjointed, each major beat taking place in its own chapter that feels divorced from the rest of the story, until they all come crashing together in the third act. It's not always as elegant as it could be, but there's no denying that it pulls it off with a confident swagger regardless, a blend of Japanese and European art styles and smoky saxophone music filling in the gaps where explanations should be. But that's the way the first Gravity Rush game is, too, so excited to show you all the cool stuff it has that it sometimes forgets to explain everything. At least Gravity Rush 2 has an actual ending this time around, tying off narrative threads and closing loops in satisfying fashion.

Gravity Rush 2 also expands on the first game's core mechanics - namely, controlling gravity and speeding through the air to kick the crap out of shadow monsters known as Nevi. The way you do this is largely unchanged from the PS4 re-release of the first game. The controls are still a bit awkward, and the camera is pretty squirrelly, especially when you land next to a set of walls or end up in confined spaces. There are a few additional sets of powers this time around - one that lets you leap high in the air, and another that weighs you down to smash through barriers and do extra damage - but they don't fundamentally change the core of how Gravity Rush is played. Basically, if you liked the way the first game felt, you'll find more of the same here; if you hated it, well, you probably won't care for this one, either.

As you progress through Gravity Rush 2, you'll periodically get random notifications from other players. These will allow you to challenge their best scores on various missions or seek out the location of treasures hidden across the land. Completing these tasks will earn you additional gems, equippable talismans that grant you various stat upgrades, and props you can place when you're taking photos with your camera. Once you complete a task, you can then upload your own challenge for other users to complete. It's a neat little addition that makes the world feel a lot more packed with stuff to do, though it'd be nice if you could send challenges to specific users.

When Gravity Rush 2 lets you navigate big, open environments, and fight massive, screen-filling bosses, it's at its absolute peak. There's a thrill that comes from heaving yourself at full speed toward the bulging, glowing eye of an enemy that few games can replicate. I also loved simply exploring, hovering in and around these floating islands looking for hidden gems that I could exchange to upgrade my abilities. A handful of story and side quests really capitalize on this feeling in ways that I don't want to spoil here, and that's when Gravity Rush 2 shines.

Where it all falls apart, though, is when Gravity Rush 2 thinks it’s a platformer, and it's totally not. Gravity Rush 2 is a much bigger game than the first one, incorporating over 50 side missions in addition to the few dozen episodes in its story - but many of them actually focus on taking your gravity bending powers away than finding interesting things to do with them. There are way more missions than I care to count where you're forced to run around on the ground like a sucker, often forced to fight off waves of enemies in mundane hand-to-hand combat with a camera ill-equipped to keep up. One set of side missions in particular casts you as the stunt double for an action movie. You have to leap between houses and floating cars with controls that aren't built for that kind of jumping precision, and after the tenth failed attempt, I was fuming.

And for as inventive and stylish as the world design, characters, and music are, the mission design in general is surprisingly archaic, often leaning on rote stealth sequences, follow-the-target missions, and fetch quests. Other missions force you to run around a given area and talk to dozens of randomly-generated passers-by, hoping you get the right person to give you a nugget of info to progress, which is as riveting as it sounds. Again, a lot of this stuff is relegated to side missions, so you can avoid them if you simply want to main-line the story, but since a lot of Gravity Rush 2's flavor comes from meeting and getting to know its ancillary characters, skipping them means missing out what makes Gravity Rush so fascinating to begin with.

Which is a shame, because so much of Gravity Rush 2 is unlike anything else out there. Its characters speak in a completely made-up language, its floating cities are full of color and life, and so much weird stuff is constantly happening in the story that you can't help but be enchanted by it. You just have to slog through a bunch of normal, tired gameplay to get to the good parts.

When Gravity Rush 2 sticks to its strengths, it soars; it’s a shame that its stale mission design and clumsy controls keep it from getting too high off the ground.