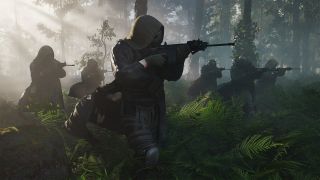 The Google Stadia is getting Ghost Recon Breakpoint on Wednesday, and it's the first game to make use of the cloud-based console's Stream Connect feature.

Stream Connect lets you see your teammates' screens in real-time as you play through co-op missions and matches. Up to three separate screens can be seen by each player, and the streams are rendered in 1080p.

Google bills the Stream Connect feature as a way to enjoy the tactical advantages of real-time screen sharing "without any performance penalties," a feat credited to the Google Stadia's cloud-based rendering.

"Many games have become so complex that the utilization of split-screen technology has declined because rendering two or more scenes at the same time is too taxing on consoles. Because Stadia resides in the cloud, there aren't the same challenges you’d have on a local machine, and you can see multiple screens without any performance penalties," reads Google's announcement.

Ghost Recon Breakpoint released in October marred by disruptive bugs and performance issues, which is unfortunate because there seems to be a worthwhile co-op experience buried underneath. The Stadia-exclusive Stream Connect feature could add a new element of strategy and coordination to co-op teams in Ghost Recon Breakpoint.

Each of the three Ghost Recon Breakpoint editions has been marked down by 50% for their respective launches on Google Stadia. For a limited time, the base game is $30/£23, the Gold Edition is $50/£38, and the Ultimate Edition is $60/£46.