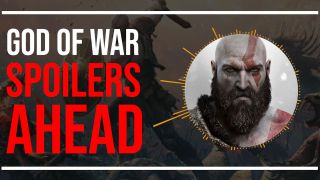 If you've finished the game then you may well have questions about the God of War ending, or perhaps you can't wait to reach the end yourself and just want to know what happens. Either way, we obviously need to issue a big old SPOILER WARNING at this point, as if you don't want to know details about the God of War ending then for Kratos' sake walk away now and read something else.

Otherwise, read on and we'll tell you not only how the story of God of War comes to an end, but also what it all means.

You can see our God of War ending questions answered in the video below:

Okay, if you really want to know the God of War ending then here we go: Kratos kills Baldur (surprise)  and takes Atreus to Jotunheim to scatter his wife's ashes. When they get there they discover Faye, Kratos wife, was actually a giant called Laufey, making Atreus half god and half giant, and with another name: Loki.

We go through a lot of question this, and the game's ending in general raise but here's a quick run through of our theories and thoughts.

Is Atreus destined to kill Kratos?

Fathers killing sons is a reoccurring theme in God of War. There's a side mission involving a bandit stabbed in the back by his own child, which Atreus fixates on a lot (he can't understand how anyone could do that). Kratos later admits he killed his own father, Zeus, which becomes a more significant admission as a result. We also see this image above in Jotunheim, showing Atreus bending over Kratos, apparently linked in someway by a rope like line. Is he helping him? Healing him? Talking? The game puts a lot of effort into making you think about patricide, so it's looking a little bleak. We even see Atreus shoot his Kratos after he destroys the first gateway to Jotunheim so we kow he's capable of rage-based impulsiveness. In the original games Kratos killed his own family in Greece as a result of Zeus manipulating his rage.

I've tried translating the runes around that image as well but it's either gibberish or an anagram. The game is meant to use Elder Futhark runes, but following that for translations gives you '?ndlal foluo hormung' - the first letter doesn't seem to have a direct Futhark representation, although 'hormung' is close to an old word for 'descendants'...

Atreus is Loki, but how does that fit in to Norse mythology?

God of War has always played loose with it's source material so the fact that Atreus' 'real' name from his mother is Loki doesn't really give us much to go on. A lot of the legends Mimir talks of in the boat would have technically had Loki involved classically so we're already straying from the source material. In some of the old texts Loki is actually the father of the world serpent which raises questions here but would explain why the Serpent says Atreus looks familiar when they first meet.

Traditionally Loki is also a shape shifter in classical lore. It's kind of his thing and clearly what's being referenced when Atreus asks if he can turn in to a wolf, apparently confusing Kratos for a moment. The mistletoe is also a callback to the original legends where Loki deliberately engineered Baldur's death using a mistletoe spear, or arrow, depending on the text.

Because the game is using Norse mythology for inspiration more than actual factual basis it's hard to tell when could come next but it's worth noting that the original legends have Loki fighting with the Jotnar against the gods, where he's eventually killed by Heimdallr. Thor fans might recognise the Anglicised version of that: Heimdall.

What happened to Fey and why did she hide what she was AND expose Atreus at the same time?

We never find out what happened to Fey, Kratos' wife. She clearly died recently given the game's funeral pyre opening. She also appears to have died naturally given that Kratos isn't blaming anyone. Mimir comments at one point that giants don't really die of old age though, so what killed her?

Another weird aspect of her death is that she marked the trees to be used for her pyre, suggesting she was alive at the time and aware she was dying. The marked trees then broke a spell that had been hiding her and her family, allowing Odin to find them and send Baldur in to cause problems. That's an odd thing for a mother do do to her child. Kratos didn't know she was a giant so it's possible Fey didn't know he was a god but she must have realised Atreus was at risk from Odin giant hunting ways.

What was Baldur/Odin after again?

The giant's gift for prophecy. Ragnarök is meant to be the end of everything and Odin doesn't like that much. Hence his persecution of the giants, mainly for not giving him what he wants: their ability to see the future. It was something he was after to help avert the apocalypse.

While Baldur initially seems to turn up looking for Kratos, Mimir mentioned that Odin wants Kratos/Atreus to go "where he cannot reach", which is Jotunheim. Atreus is confused how anyone could know that before they knew the highest mountain in all the realms was in Jotunheim, but Mimir points out that Odin collects prophecies. He possibly didn't really know who Kratos was, or Atreus even existed, just that their journey was foretold.

Yes. But that doesn't mean anything. Remember the bit just after Kratos has snapped his neck and Freya is promising to call down every bad thing she can to get her revenge? In the original Norse legends after Baldur died Freya (known as Frigg, in this version) struck a deal with Hel to release Baldur from the underworld if everything alive and dead would weep for him. Everything did, except a giantess called Þökk, who is widely believed to be Loki in disguise. Because not everything had wept, Baldur was kept in the underworld until after Ragnarök.

While that version is unlikely to happen in the game, Freya made it clear that she wold do anything to punish Kratos, so a little deal with heal is not impossible.

Are we going to see Ragnarok?

At the end of the game we're told Fimbulwinter is coming. This is a three year 'great winter' that proceeds Ragnarök, the Norse apocalypse. Now, there's a second ending after the initial credits roll when you return home and,  here, Thor appears 'several years later'. It's a brief tease, ending after Kratos asks him what he wants.

If the extra snow and ice you see after you've finished the game is Fimbulwinter, then this flash forward sequence would be nearing Ragnarök. Although Kratos killed Thor's sons, I don't think he's here for revenge. I think he's here for help to prevent the end of the world.

Tyr is the Norse god of war who's continually referenced but never seen. We know he was it was a much loved deity who worked hard to maintain peace - a diplomat who travelled extensively to learn about other cultures.

In his vault we see the above image showing that he visited Mayan cultures, Egypt and China. That's interesting because, in an interview, Cory Barlog has mentioned Mayan and Egyptian locations as possible settings for future God of War games.

Now, bear with me here, but I think Kratos is Tyr. The mention of Fimulwinter and the appearance of Thor suggest Ragnarök is coming. One interesting thing we know is that the World Serpent is actually from the future - he fights Thor at Ragnarök and was... will be... essentially hit so hard he travels back in time.

Honestly, I'm not making this stuff up look:

The only reason I even noticed this is because when Mimir tells this story in the boat Kratos scoffs loudly at the idea in a very odd way. He doesn't comment, just laughs to underline the moment. 'Time travel? HAH'. There's also some dialogue when Kratos finds Tyr's Jotnar shrine and Mimir seems to think it shows the god traveling in some way he's unsure about, suggesting it might be magical in someway...

My theory is that Kratos is dragged into Ragnarök and, like the World Serpent, thrown back in time by the force of the cataclysm; wandering the the Earth through the ages until he eventually become the wise and peaceful Tyr.

Tyr never appears in the game but we know he was a big friend of the giants, which would make sense if your son was one. We also know he was wise, and a good man - everything Kratos is hoping to be. It's also convenient that Tyr's shrine has a secret message that can only be read by Mimir's eyes. Almost as if Tyr knew who would be looking at it later...

The Symbol for Tyr is even in the logo for the game if this translation is to be believed.

If you've got any ideas or thoughts on the ending then add them to the comments. I'll be updating this features as and when I think of things, or people find new information so check back from time to time.