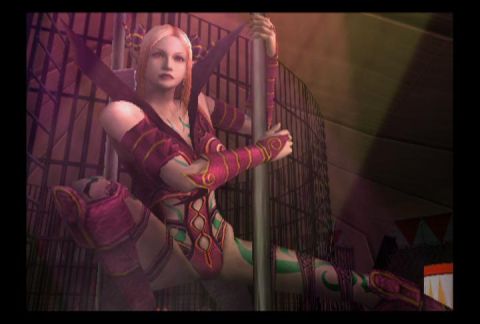 You can send God Hand's very first enemy flying 30 yards into the distance, smashing him through a support that sends a whole roof crashing down. If you're not cackling with glee at this point, you might be after running up and mashing buttons to stomp the rest of the life out of him. This is God Hand, the most frenetic and over-the-top beat 'em-up on PS2. It's a game about the sheer, idiotic joy of beating the crap out of things, and the best homage to '80s arcade ideals this side of 360's Geometry Wars.

God Hand's story is so thin that it's played for laughs, and it's better for it. Gene, the young man grafted with the God Hand (an arm, really) is constantly hen-pecked by his beautiful traveling companion, Olivia, in cinematics right out of a vintage sitcom. At one point the story threatens to get serious, but Gene saves the situation with an inappropriate insinuation that Olivia's been turning tricks. You'll find yourself saying "They didn't just do that!" quite a bit... because they just did.