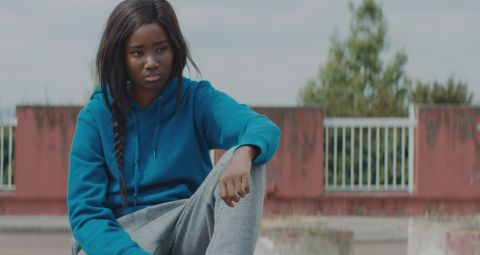 It’s great to see a gritty girl-gang story that’s not a fingerwagging cautionary tale, or a grrrlpower fantasy. Sciamma finishes her coming-of-age trilogy on a high note.

She’s the leader of the pack...

French arthouse darling Céline Sciamma really hits the mark with this tender, spirited story of a stifled teen rebelling in a tough girl gang on a Parisian sink estate. As in the atmospheric Waterlilies and touching Tomboy, Sciamma captures the energy, stern loyalties and harsh rivalries of young girls with a sharp and sympathetic eye.

What’s fresh here is how she gets right under the skin of restless 15 year old Marieme (a fine-textured turn from first-time actress Karidja Touré). Desperate to escape her dead-end schooling and slap-happy elder brother, she reinvents herself as the knife-toting Vic in a mouthy quartet of shoplifting, lunch-money-looting bad girls.

There’s an echo of Andrea Arnold’s Fish Tank in these oppressed tower-block teens, juggling big desires and limited options, but rather than gloomy social realism the film finds moody beauty in the girls’ windblown concrete hangouts.

Sciamma shapes her story with an artful style that’s light on dialogue and long on atmosphere. Employing drawn-out, immersive scenes and stylised visuals, she sums up the sheer exhilaration of teenage kicks in a stunning sequence where the girls party giddily to Rihanna’s ‘Diamonds’.

Too bad, then, that the film’s careful immersion and setting is marred late on by bumpy plotting, lurching unexpectedly from dance-offs to drug-dealing, as Marieme challenges Assa Sylla’s charismatic ringleader, Lady, for the top spot. When a film has this kind of emotional intensity, there’s no need for melodrama.

It’s great to see a gritty girl-gang story that’s not a fingerwagging cautionary tale, or a grrrlpower fantasy. Sciamma finishes her coming-of-age trilogy on a high note.