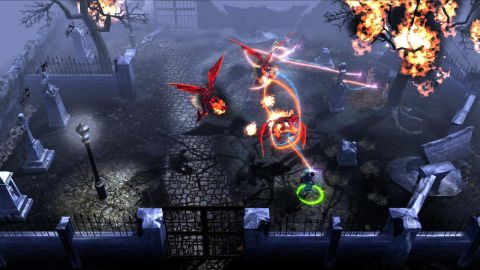 What, if you recall, was the number one rule for a Ghostbuster handling a proton beam? That’s right:“Don’t cross the streams.” If you think about it, you’ve already got the design blueprint for a unique cooperative twin-stick shooter right there. Can you imagine a game in which crossing your stream of fire with your buddy would result in instant death for both of you? You’d have to be super-careful, lay off the trigger, and keep in constant communication in order to survive. You’d develop camaraderie with your teammates and whack your friends on the couch upside the heads if they screwed up. To be honest, that sounds like a pretty fun Ghostbusters game, if a little high-stress.

Yeah: Ghostbusters: Sanctum of Slime is nothing like that.

For instance, instead of adopting the approach we’ve imagined, Ghostbusters: SOS lets you fire your proton beam indiscriminately, refusing to penalize you even for intentionally blasting your friend in the face. Fudging the canonical laws of physics makes the game more accessible, sure, but where does that leave us? What separates Ghostbusters: SOS from literally every other twin-stick shooter on the market? Not a lot.

It’s certainly not the charm or character that we’d expect from a Ghostbusters product. The story here is told via barely-animated comic book cutscenes with pages worth of unfunny, unengaging text. We didn’t pay $10 to download a lousy comic book, and the story, which revolves around the resurrection of “Dumazu the destroyer,” does absolutely nothing to contextualize the mindless blasting of zombies and Technicolor ghosts that populate each and every level. There are text overlays during gameplay (the “New” Ghostbusters themselves have no voices) where your characters quip about the bland environments.

Above: Try to imagine all life as you know it stopping instantaneously

Here’s a sample joke: you’re in a kitchen and you zap a ghost that looks like a chef near an oven. “Now you’re cooking with gas!” quips Sam, one of your teammates. “Don’t quit your day job, Sam,” retorts Bridget, your witty female companion. Game writers: if one of your best jokes is followed by a character telling the jokester he’s not funny, maybe you should consider writing some better jokes. I agree with Ms. Bridget: Sam is not funny. Nor is Ms. Bridget. And humor this knowingly lame should not be in a game with the “Ghostbusters” pedigree. It adds nothing to the story or the gameplay: just cut it!

In terms of the toys at your disposal, you eventually obtain a total of three weapons throughout the game. There’s your red standard proton beam, a yellow shotgun-esque electricity wave, and a bouncing blue ball of energy. Each weapon is only effective against enemies of the same color, so you switch between the weapons constantly as you get thrown wave after wave of baddies at you. You’ll go from room to room, lazily blasting away until you get to a boss, who will have a stupidly long health bar and will invariably either (a) charge at you, (b) fire a projectile, or (c) summon minions to distract you. When its health is low, you’ll press a button to initiate a QTE and capture the boss, ending the level.

Above: Whatever pun you were expecting the game to make will undoubtedly be funnier than the one it actually makes

A few on-rails levels wherein you blast ghosts on top of the ECTO-4WD break up the action, but we never made it to the final encounter because of the huge spike in difficulty in the later levels. Someone ought to have told the developers that the “revisit all the old levels in the last Act but make them harder” trick is the most cheap and frankly insulting way to pad out a game’s length ever devised, and if you have the patience to wade through that awful graveyard level again, consider yourself braver than us.

The main reason for the game’s unfair difficulty, apart from the incessant waves of enemies with fewer and fewer checkpoints, is the fact that your AI-controlled teammates are dumb enough to make you cry. They have the ability to revive you if you fall (which you will, as you rarely get health pickups), but they will frequently stop reviving you halfway through the process or charge head on into traps in an attempt to get to you, getting killed and forcing you to restart. The AI bots frequently use the wrong color beam on enemies and we witnessed a few occasions where one of our partners stood in a blast of fire for a good five seconds until his health had completely depleted. You can have a friend play co-op with you instead of the AI, but your friends can’t drop in at any time, and worse, they can’t drop out either, which means that when they inevitably throw their controller across the room in frustration and refuse to continue, you’ll have to restart the level without them.

Above: Being forced to replay this Evil Train boss more than once was almost too much to bear

Not that you will. Ghostbusters: SOS will break you down, challenging your patience and your goodwill toward the franchise. Even if you’re a diehard Ghostbusters fan, don’t let yourself be duped: this game is a waste of your $10.