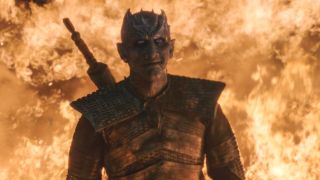 This week’s Game of Thrones season 8 episode, The Long Night, represented the first real time that HBO’s insatiable fantasy drama became a victim of its own expectations. The Battle of Winterfell did, technically speaking, live up to its promise as the longest battle in entertainment history, but – with the danger of sounding crass – ‘longest’ doesn’t necessarily mean ‘biggest’ or ‘best’, as every high note of the depicted conflict came with a caveat.

The cinematography, brought to life with a healthy blend of CGI and practical effects, was drop dead gorgeous, but only when we could see it clearly enough through the laughably darkened colour scheme. The battle scenes were stirring and expertly choreographed, but somewhat underhanded by the fact that they made no sense from a logistical point of view. Meanwhile, for a small but vocal sect of the Thrones fanbase, the only real surprise of the night (which, quite literally, came out of nowhere) was one which didn’t sit well in the stomach; the Night King’s death at the hands of Arya Stark.

Already, there are debates about whether Arya ‘earned’ the right to kill Game of Thrones’ biggest baddie instead of her older brother, and why HBO decided to give the youngest Stark daughter that honour when Jon had been seemingly set up to be the prince that was promised; the unnamed hero of legend who would emerge to put an end to the White Walker threat. While I certainly sympathise with the idea that the Night King’s death felt somewhat abrupt and anticlimactic following seven seasons of buildup, the truth is that Arya has always been the person that should stick him with the pointy end, and the evidence – like the master of stealth herself – has been hiding in plain sight.

In a recently released ‘making of’ video looking behind the scenes of The Long Night, showrunner David Benioff revealed that he and his Thrones partner in crime D.B. Weiss have known for the last three years that Arya would be the one to kill the Night King, which would date back to around the time they were writing Game of Thrones season 7. That makes sense, as it’s in this season where the foreshadowing for that encounter is most prominent, from the scene in which Arya practices the exact same move she uses to kill the Night King on Brienne, to the moment where Bran gives her the totemic Valyrian knife itself, knowing that she would need it for a vital, unknown purpose in the near future.

But, even before that, Game of Thrones had been quietly sowing the seeds for Arya’s destiny the Night King slayer as far back as season 1, suggesting this could well be George R.R. Martin’s intentions for the novels too, and not just a divergent choice on the part the showrunners, as some might be inclined to presume. In season 3, Arya meets the prophetic Melisandre for the first time, who tells the newly orphaned Stark girl that the eyes she’ll “shut forever” will be brown, blue, and green.

Those brown eyes, of course, belonged to Walder Frey, who Arya killed at the end of season 6, while we now know that the blue eyes were those of the Night King himself. There’s plenty of discussion about who the green eyes could represent (the bookie’s odds are on Cersei), but the fact that the Night King’s demise at Arya’s hands was foretold as early as 2013 proves the assassination is far from the ‘Mary Sue’ scenario that certain members of the Thrones community are propagating.

As for all those “prince that was promised” prophecies that most had presumed to refer to Jon Snow, lest we forget that, in season 7, Missandei confirmed that the etymology of this High Valyrian saying doesn’t actually specify a gender, but translates more accurately as “prince or princess”, and Arya’s royal status very much falls in the latter category. Then there’s the fact that, ever since she lost her father to the Lannisters in season 1, Arya has been learning to say “not today” to the God of Death; a mantra which she then reaffirms during an exchange with Melisandre at the Battle of Winterfell. And if anyone embodies the God of Death, it’s the Night King himself, who wants to effectively wipe out all human life in Westeros, and any memory of its existence.

Even without all the obvious telegraphy, though, Arya’s uniquely Thrones-flavoured coming of age story is an arc that could have only culminated with the Night King’s death. This is a character who has been training for approximately seven years under some of the most advanced fighters and assassins in Westeros, from the graceful swordsmanship of Syrio Forel and brutal fisticuffs of The Hound, to the disciplined subterfuge of Jaqen H'ghar.

If that journey didn’t come to a close with Arya taking down of one of the last remaining threats to her family, then we might as well be asking what the point her entire odyssey was up untill now. This character didn’t give up her childhood to become an assassin for nothing, after all, and her decision in season 6 to let go of righteous vengeance and start rediscovering her humanity has to have meaning.

Not only that, but a long-running theory about the Game of Thrones ending postulates that Arya's generation will finally bring an close to the cycle of violence forever perpetuated by the Lannisters, Targaryens, and all the other feuding houses of the Seven Kingdoms. The end goal for Game of Thrones' epic saga isn't about who sits on the Iron Throne, but who destroys it for good, and I can't think of a better precursor to that than the youngest living Stark taking on the oldest agent of conflict in Westeros, and rendering them into non-existence.

In music, an ‘aria’ is an extended song that usually features in Opera and focuses on a single voice. For years, Game of Thrones fans have been wondering about the meaning behind the “Song of Ice & Fire” that were engraved across the front of Martin’s novels. Given the events of The Last Night, it’s now very possible that Arya herself is that song; the hero of our story that has been slowly emerging from a crowded cast of characters to reveal her true nature as a heroine. For seven and a half seasons, Game of Thrones made it look like no one could take the Night King down. It turns out they were right, and that no one is potentially on her way to becoming the someone that Game of Thrones deserves.

For more, check out the wildest Game of Thrones theories that fans have for season 8, or watch the video below for a full recap of every season so far.